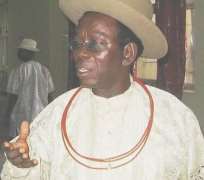 Delta State Governor, Senator Ifeanyi Okowa has expressed his grief over the passing of one of Nigeria’s renowned Sociologists and Anthropologists, Professor Onigu Otite.

Governor Okowa, in a message signed by his Chief Press Secretary, Mr. Charles Aniagwu, extends heartfelt condolences to the Otite family, the people of Okpara Inland in Ethiope East Local Government Area of Delta State, the Agbon Traditional Council as well as the Urhobo nation and the National Association of Sociologists and Anthropologists NASA on the painful demise of the pioneer Sociologist.

The Governor affirmed that as an author, Otite exuded vibrancy, intelligence and innovation in his works as a social commentator, constantly in search of plausible answers and solutions to contemporary issues bedevilling his society.

Through his research, the Governor believes that Otite was focused on ethnic conflicts and resolutions with particular interests in the Niger Delta ethnic groups where there are frequent communal clashes leading to disruption of crude oil production and loss of both life and property, adding "He was key at University of Ibadan where he pioneered the Social Science Department as early as 1967 and introduced courses such as the African Social Thought in Sociology Department at the University of Ibadan.

The Governor encourages all Nigerians, the literary community and lovers of art to honour Otite’s memory by imbibing the didactic message of his works.