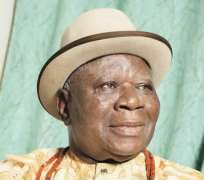 The Bayelsa State chapter of the People’s Democratic Party has condemned in strong terms what it described as the despicable display of disrespect for the person of Ijaw National Leader, Pa Edwin Clark and other elder statesmen and leaders in the South South and Middle Belt.

The State Secretary òf the PDP, Chief Godspower Keku, berated the State Publicity Secretary òf the APC for casting aspersions on the integrity of Pa Clark and other leaders in the South South and Middle Belt for saying the truth about the election+related violence in Rivers and Bayelsa.

Keku said that it was as immoral as it is sickening for a son of the South South to make such a disparaging remark about the elders and leaders of his people for saying the truth about issues of grave concern to them.

He said that the statement attributed to Buokoribo, where he described Pa Clark and other leaders as a disgrace fits perfectly into APC’s language of desperation and culture of violence in Bayelsa.

Keku said that a child who looks his grandfather in the face to describe him as a disgrace only advertises the nakedness òf his household to the strangers.

He said that the time had come for the APC led by Chief Timipre Sylva and Senator Heineken Lokpobiri to realize that this failed attempt to drag respected elders of the land in disrepute would not change the APC’s story of political rejection in Bayelsa and the South South.

He stressed that in spite of the massive deployment of soldiers to aid the evil plot of the APC to rig the election in Bayelsa, the people roundly rejected them with the PDP clinching 17 out of the 21 declared results of the 24 House òf Assembly seats.

Keku added that the PDP would leave no stone unturned in the move to retrieve the four seat erroneously announced for the APC at the tribunal as the APC lacks the capacity to win a seat in the House òf Assembly in a free and fair contest.

The PDP Scribe called on the APC leader, Chief Timipre Sylva, and his remnant òf supporters to immediately tender an unresolved apology to the Ijaw Nation, the Niger Delta, the South South and the Middle Belt for the undeserved invectives on the Elder Statesman, Pa Clark and other leaders in the South South and North Central.

He stressed that a people of culture would not indulge in a despicable attempt to convert their leaders to objects of mockery for saying the truth which the APC was attempting to do after suffering a most humiliating and crushing defeat in the hand of the PDP in the last election.

Keku said that it was rather sad that the APC was targeting the elders of land like Pa Clark and others as the innocent victims of the defeat-inspired transferred aggression.

He said that it was a statement of fact that thugs loyal to Sylva who were backed by soldiers unleashed mayhem on innocent Bayelsa citizens leading to the shooting to death of PDP Ward Leader in Oweikorogha, Southern Ijaw, and Government House Photographer, Reginald Dei among others.

He added that the violence in Nembe Bassambiri and the chasing out and disenfranchisement of PDP members from the seven wards of the community should prick the conscience of the APC.

He said that insulting the elders of the land for saying the truth was not the best way to atone for the political crimes of the APC against the people of the Ijaw people, the South South and the Niger Delta.

He stressed that with this new past time of the APC to insult elder statesmen like Pa Clark, and others, the APC was on its way to extinction in Bayelsa politics.