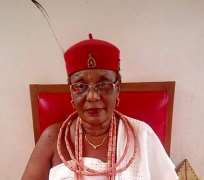 She said that Governor Okowa's reelection is the best thing that has happened to Delta State in recent times, adding that anything contrary wouldn't have sustained the peace, unity and cultural harmony that the State had enjoyed over the years.

According to the highly cerebral Public Relations expert in a statement released to the media, "Senator Ifeanyi Okowa has made us proud in Anioma. We have a humble fighter who has not only sustained a dogmatic political experience, but has remained highly distinguished and respected.

When the campaigns and the political intrigues were so heightened, I had one consolation; and that is the fact that Okowa's victory had long been ordained in the spiritual realm.

He is a man of grace; he prays and respects the source of his power, which is God Himself. We had nothing to worry or fear about but to continue to agree with him in prayers for God and Anioma ancestral guidance and protection.

We thank God the election of an Anioma son as Governor of Delta State for a second time is now history. It wouldn't have been palatable that after the Central and Southern Senatorial Districts had done their two terms each respectively; Delta North (Anioma) would be relegated to the background or told they were not good enough to do second term.

I congratulate our reelected Governor for making us proud in Anioma. It's also pertinent to state that apart from the demand for equity and unity in the campaign for his reelection, he had performed exceedingly well with a kind of development not seen before now.

Let me also commend those with whom God used to help him in this fight, especially our brothers from the Central and South Senatorial Districts of the State. God bless you all", Omu Dunkwu posited.

She asked the Governor to use the second term to work more in order to permanently place Delta in the history of States recognised for Most Outstanding Development, and thereby having his name etched in the hall of fame of legends.

The Omu Anioma further stated that Governor Okowa should be wary of sycophants this time, in order to avoid any taint on his towering political image.