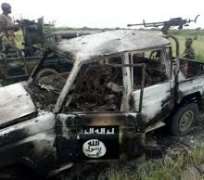 The dogged troops of 152 Battalion successfully crushed some members of the Boko Haram Terrorists ( BHTs) when they attempted to infiltrate their location yesterday, 11 March 2019 at about 1900hrs around Bula - Yobe, Banki axis in Borno State.

The Terrorists in their futile attempt came in with several Gun Trucks mounted with Anti Aircraft Guns and Motorcycles.

The fierce gun battle set confusion and disorganisation in the terrorists camp, withdrawing in disarray while the troops gave them a hot pursuit.

In that process, unconfirmed number of terrorists were neutralised while several others fled with gunshot wounds.