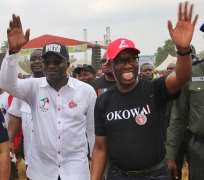 He equally felicitated with Deltans and other residents of the state for overwhelmingly voting the state Governor into office for a second tenure.

Speaking in Asaba after the announcement of the result, Chief Ukah, assured the governor of the continued support of the people during his second tenure in office, adding that the victory of the governor is well deserved as he delivered on his promises in his first term in office.

He said that the victory of Dr. Okowa is a clear manifestation that there is reward for hard work as the governor worked round the clock to ensure that inhabitants of the state benefit from his Smart Agenda.

Chief Ukah thanked the people for trouping out in large numbers to cast their votes and for their orderly conducts during the polls.

He particularly commended the people of Oshimili North Local Government Area for their love for the governor by giving him 37,774 votes against the 2,906 the APC had.

The Commissioner for Information assured the people of the area of more developmental projects during the second tenure of Dr. Okowa.