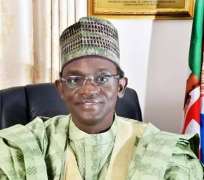 The All Progressives Congress (APC) governorship candidate for Yobe state, Alhani Mai Mala Buni has been declared winner of the 2019 Governorship election that was held on Saturday, 9th March, 2019.

The Returning Officer however said that there was a total of 563,431 accredited voters and a total of 546,391 valid votes while the total rejected votes was 14,101 due to number of reasons.