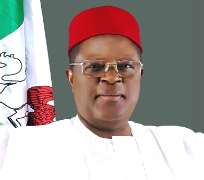 Governor David Umahi, the Governor elect of Ebonyi State has expressed his unalloyed loyalty to the patriotic citizens of Ebonyi State for re-electing him for second term and promised to consolidate on the aggressive infrastructural, human development and aggressive industrialization of the state, the tripod on which his administration stands.

The Governor also reiterated his readiness to hand over power to Abakaliki bloc in 2023 after completing his second term to continue to rotate round the three senatorial zones of the state in the spirit of equity and justice.

Umahi in a statement signed by his Chief Press Secretary, Emmanuel Uzor described the election as the reflection of the wishes of Ndi Ebonyi who have been resolute and desirous of consolidating on the already achieved development in the state.

The statement as signed by Uzor also quoted Umahi as saying that the election was the best in terms of credibility and professionalism on both the sides of the Independent National Electoral Commission, INEC and all security agencies and called on those that contested with him to accept defeat as the consensus of the people of the state.

He promised that his second term projects would include the construction of Ebonyi airport, mega Olympic size stadium and completion of the already started 198km Abakaliki ring road and many more, adding that within the first four years of his administration, over 534km of roads have been constructed on rigid pavement with over 100 yeas life span, mega shopping mall, International market, Ecumenical Centre as well as new government House while the stigma on the Abakaliki man was removed by reconstructing and making Ebonyi State the model of development.

He said his closest rival and candidate of the All Progressive Congress, APc, Senator Sonni Ogbuoji was never his match, noting that the verdict of the entire people of the state as reflected in their ballots across the 13 Local Government areas of the state confirmed that his opponent was never and will never be a match to his political sagacity.

Umahi commended the INEC for their professionalism and expressed readiness of his administration to seek justice for those whose lives were cut short in the cause of the election and bring the perpetrators to book irrespective of party affiliation.

He thanked the Christian and Muslim communities, civil and public servants and indeed the entire people of the state for appreciating his good works in the first term and entrusting their mandate on him again for another four years.