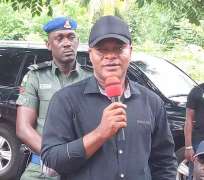 Ebonyi state Deputy Governor Barr. Eric Kelechi Igwe has condemned in its entirety the call by All Peoples Congress APC for the cancellation of election in Ohaukwu local government of the state, describing it as a weak statement from a weak party.

The deputy Governor who made this remark in his polling unit at onunwakpu in Ndufu Alike ward, Ikwo local governmeny while exchanging views with newsmen decried low turn out of voters.

Barr. Igwe also accused the All Progressive Congress APC of being behind the attacks and electoral malpractices in some polling units in the state.

Barr. Igwe noted that Nigeria has come of age and urged the opposition party in the state to play by the rules and give democracy a chance to thrive.

Hear him" I got a distress call that the military were found in some polling units, and is causing panic within the community that voters have to disappear from the scene.

"So what I am doing now is to go round calling People to come out and vote that the military was not there to kill anybody or harass them, but they were there to ensure that the rule of engagement in Electoral process is maintained.he said

"Two days ago, we heard that the APC cacus meeting with their party chairman in Abuja was to ensure that voting did not take place in Ohaukwu local government Area which is part of the catching Area. They are sure that if election in some council areas are cancelled, the election will be declared inconclusive.

" That is a strategy of a weak person in politics. Their plan will only work in areas where they have ground.

" I know in Ebonyi here, people will resist them even if they obstruct voting in one polling unit, the rest of the area, voting is going on so their strategy will not work" he stated.

However, the Senator Representing Ebonyi North Senatorial zone senator Obinna Joseph Ogba has attributed the low turnout of voters in some parts of the state to inability of the Independent National Electoral Commission (INEC) to declare the Alhaji Atiku Abubakar of the Peoples Democratic Party PDP winner in the just concluded Presidential election.

Ogba who stated this in an interview with journalists at his polling unit also condemned the attack on INEC RAC at Ezza North by suspected political thugs at the early hours of today's election.

Recall that the APC chairman Nwachukwu Eze , has called on Independent National Electoral commission (INEC ) to cancel the state election in Ohaukwu local government area following the attack and electoral violence in the area.