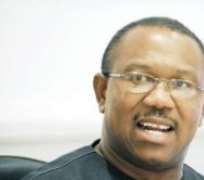 The Vice Presidential Candidate of the Peoples Democratic Party (PDP), Mr. Peter Obi, was on Friday afternoon stopped from holding a meeting in his home town, Agulu, Anambra State.

The news which first was taken as a rumour was confirmed when the people of the town, already seated for the meeting at 1pm, were asked by the President General of the town, Mr. Andy Orakwue, to leave the hall of Agulu Town Union building as the meeting had been called off.

Orakwue did not give any reason, but sources revealed that he was under intense pressure by security agents to call off the meeting even when he explained that it was a routine meeting with the people, carefully chosen to hold before those that came home for elections would start returning to their bases. The President General, in a bid to convince the security agents that the meeting had no political undertone, had showed them the agenda which had “Thank you by the Vice Presidential Candidate, Discussion on the planned empowerment of the people of the town by Mr. Peter Obi, and Peter Obi's Mentorship Programme” as the only three items. He was nevertheless asked to call off the meeting in his own interest, since the order came from the Government.

Earlier in the day, a rumour had gone viral on social media that Governor Obiano, National Leader of the ruling party in the state, the All Progressives Grand Alliance (APGA), had vowed to disgrace Obi, his immediate predecessor, by making sure that PDP loses Anaocha in Saturday's state assembly election in Anambra.

When contacted, Obi's Special Adviser on Media, Mr. Valentine Obienyem, confirmed the story. He said: “His Excellency received many calls from security agencies on the meeting. Saddened by so violation of freedom of association contrary to the Constitution, Obi said they had not given him enough reasons not to meet with his people. He even went on to demand that they send their agents to monitor the meeting which had nothing to do with politics, but they would not listen, saying the order came from the Government. Obi did not want to obey a clear illegality as happened when the same people tried to stop him from coming to the state on flimsy reasons, but, alas, after much pressure, the subdued President General had to call it off. The irony of the situation is that the Government said they were bent on making sure Obi loses his constituency even when His Excellency is not so much keen on which party wins the House of Assembly as his major concern now is national issues.”

Reacting to the development in a letter by Good Governance Vanguard signed by its Chairman, Mr. Maduagwu Eric-kenny and Chief Emma Ejidike, the group said: “His Excellency Mr. Peter Obi is an illustrious son of Agulu. We are proud of him and he has every right to hold meeting and associate with his people.” The group warned those interfering with Obi's fundamental right and freedom of association to desist from such illegality.