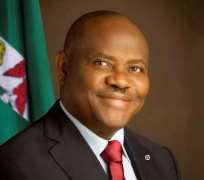 An Abuja Federal High court on Friday dismissed the alleged birth certificate forgery suit seeking to disqualify the Rivers State Governor, Nyesom Wike from participating in the Saturday’s governorship election in the state.

The plaintiff, Elvis Chinda prayed the court to determine if Wike’s birth Certificate, Statutory Declaration of Age, attached to the governor’s Form C.F.001 presented to the Independent National Electoral Commission, INEC, was forged.

He said the certificate titled “Statutory Declaration of Age”, attached to Wike’s Form C.F.001, and purportedly deposed to on October 3, 1986, by one Collins Nyeme Wike had claimed that the governor at the time of deposition, was a native of Rumuepirikom in Obio/Akpor Local Government Area of Rivers State.

Chinda’s counsel argued that as at 1986 when the certificate was allegedly obtained, Obio/ Akpor Local Government Areas of Rivers was not in existence

The plaintiff contended that the Obio/ Akpor Local Government Areas of Rivers State was created in 1989 by Decree No 12 of 1989, two years after the alleged forgery was committed.

“That the certificate of birth ( Statutory Declaration of Age) was purported sworn to and issued at the High/Magistrate’s Court Registry, Port Harcourt but allegedly bears stamp of the Judiciary Probate Registry ,Port Harcourt.

He argued that the forged certificate of birth misled INEC into believing that the governor had a genuine birth certificate that confirmed his alleged date of birth given as 13th March 1963.

The plaintiff said the cover up, “began in 1989, when Wike expressed desire to contest for the local chairmanship of Obio/ Akpor Local Government Area Council election in Rivers State which INEC had fixed 35 years age for eligibility.

He argued that INEC, “is not in a position legally to disqualify Wike from contesting the governorship election except the court gave an order disqualifying him for the breach of Section 182 (1) (j) of the Constitution of Federal Republic of Nigeria”.

In his ruling, the presiding judge, Justice Inyang Ekwo, held that the suit was filed out of time, as stipulated by the section 285, subsection 9 the 1999 constitution.

The judge said the suit ought to be filed 14 days after the cause of action had taken place.

Declaring the entire suit “statue barred,” the judge dismissed it because it’s an abuse of court process.