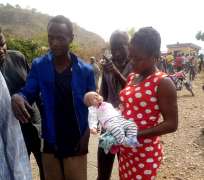 A total of Fifteen people; nine women and six children, have been reportedly injured by an explosion which took place in Mpape, a suburb in Abuja. Investigations revealed that the explosion was caused by staff of the Federal Ministry of Mines and Steel, who were contacted by Examines Nigeria Ltd, to destroy some expired explosives which the mining company employs in its mining activities.

The heavy explosion which was said to have came from behind the hills along Jikoko Road in Mpape, few minutes before 3 O’clock on Thursday, March 7, 2019, sent everyone scampering for their lives, as it left behind ruins, destructions and endangerment of lives in the area. According to eyewitnesses, the ground vibrated heavily, buildings shook to their very foundation and a mass of brown smoke rose from the direction of the explosion to a length equaling a ten story building.

One of the residents, Uche Patrick, who spoke to Persecond, had thought that the explosion was an intensive blast from mining activities that go on in the quarries around. “We have not heard anything like this before, and I begin to wonder why in this present age and time, such kind of mining activity can go on very close to where people are living.

The entire building here almost turned upside down. I heard a lot of people complaining about their cracked walls, falling ceilings and other parts of their houses that were damaged,” he explained. Uche, however commended the quick response of the police and the special mining surveillance team for their timely response. Another resident, Clinton Onwudiwe, said his neighbour had her child’s life saved by the whiskers, as she had shortly removed the child from his lying position before the blast took place and a block fell directly where her child was lying.

However, another resident, Salisu Rabiu was not so lucky, as he was at work when his neighbor called on him that his children and those of his neighbors, and their wives had been badly injured by the explosion. As at when Salisu rushed home, those injured had been rushed to the hospital, but he was saddened by the fact that the children and women were not attended to. “I was at my working place, when my neighbor called me that an explosion happened. Immediately, I left my workplace and rushed home to see what was happening.

They took our five children to the hospital. “They attached a police to them, and they were told at the hospital that they can’t attend to them,” he narrated. Okafor Emmanuel, who had a clearer picture of the state of those affected said, “a wood and zinc fell on a woman and her baby in this building. I pleaded with the police man to take one of his police men and lead the victims to the hospital to commence treatment, but they didn’t oblige. Finally the DPO charged one of the police men to take them to the hospital. “Getting to this life point clinic, their ceiling was also down, so they were busy trying to put things in order, and said they could not attend to people because the ceiling fell on top of their equipments. “There were a total of nine women, five children and one infant.”

Also speaking, the Managing Director of Ausbadin Security Company guards, Augustine Ibadin, which guides the premises of Examines Nigeria Limited, narrated how his clients had contacted the Ministry of Mines and Steel to help dispose of expired explosives. “I was not around. They called me that there was pandemonium, and I tried to find out what happened. “They said Ministry of Mines and Steel came here to dispose off some explosives after they were contacted by the company, as they were the professionals and by virtue of the fact that that was their area of specialization. “The company provided a tractor for them, and the ministry dug a very big hole to dispose off these expired explosives.

From what I heard, one of them; I don’t know if that is the professional way of disposing explosives, ignited a matchstick and that was how the whole thing blew off,” he narrated. The Director of Applied and Engineering Geology, Nigeria Geological Survey Agency, Nelson Amangele, who was also at the site of the explosion said it was obvious that the standard practice was not employed in disposing of the expired explosives, owing to the massive damage done. He however, urged residents of Mpape and its environs to remain calm and have no fears as the explosion was not from any seismic activity.

Other residents who spoke on the basis of anonymity argued that government allowed such unhealthy activity to be carried in the area because it is basically occupied by the poor and lowly in the society.