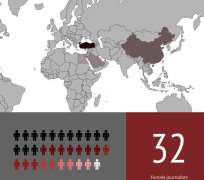 On International Women's Day, CPJ has highlighted the cases of female journalists jailed around the world in retaliation for their work. At least 33 of the 251 journalists in jail at the time of CPJ's prison census are women. At least one of those--Turkish reporter and artist Zehra Dogan--was released in February after serving a sentence on anti-state charges. The four female journalists jailed in Saudi Arabia were detained over their criticism of the kingdom's ban on women driving.