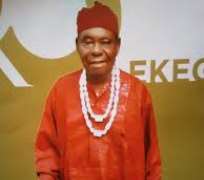 Late Eze Richard O Ekegbu was said to be the first Igbo man to invest in the city of Oyigbo after the Biafra war. He was the Chairman of Oyigbo Development Committee in 1976 and under his tenure, electrification of Oyigbo was accomplished.

He was the Grand Patron of Hotel Owners Association of Oyigbo and Etchie LGA in Rivers State, and the leader of Igbo Community in Oyigbo. He died January 4, 2018 and buried in March 22, 2019. His memorial was held on Sunday, 3 March, 2019 at his home town in Imo State