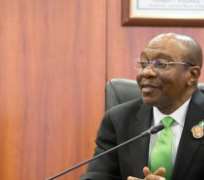 The Central Bank of Nigeria (CBN) has debunked the report  that its Governor, Godwin Emefiele had been sacked.

The Director, Corporate Communications, Isaac Okorafor, said in response to inquiries that nothing could be farther from the truth.

“The governor is in his office working.”
“There is nothing like that, the governor is here, his tenure expires in June. In fact he has functions to attend to tomorrow, one of which is to meet with stakeholders in the cotton value chain on Tuesday March 5, (today),” another CBN official said.

An online medium had reported yesterday afternoon that the CBN governor has been sacked by the Presidency and given two weeks to clear his table and “handover to an unnamed successor.”