Why Buhari should sack Marilyn Amobi and probe NBET 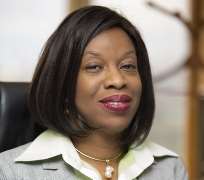 Although she wears the look of an angel,what lies beneath the pleasant façade is the exact opposite. To say Dr. Marilyn Amobi, Managing Director/CEO of the Nigerian Bulk Electricity Trading (NBET) Plc, is utterlyimperious and saucy would be putting it mildly. Besides the abiding tyrannical behaviour and cheekiness, she is as Machiavellian as they come—ever contriving and plotting to have her way, and if not, take down anyone, staff or non-staff, perceived to be standing in the way of heroften unfavourable and harmful style of running NBET.

Those she can’t take down she dresses down conveniently with her blistering tongue, not minding whether she is answerable to them.Ask Babatunde Fashola, the Minister of Power, Works and Housing under whose supervision NBET falls, and Louis Edozien, the permanent secretary.

If sheonce stood toe-to-toe with Fashola and told him he had better get it that she was as much an appointee of the Muhammadu Buhari government as he was, you can be sure that treating any other person who dare to ask hard questions about her role in NBET with worse humiliation would mean nothing to her.Last year, Samuel Tukura, Auditor General of the Federation, got a healthy dose of Amobi’s insult when he released the 2017 audit report that indicted her. On receiving the report, Amobi rushed to Auditor General’s office and thoroughly lambasted him in the presence of his directors. Some journalists and civil society activists would also easily recallsour experience with the NBET boss.

There is no doubt that under Amobi, NBET continues to stink with sickening revulsion. Tons upon tons of allegations, including mindless financial corruption, abuse of office, harassment of management and non-management staff, total disregard for due process and extant financial regulations are in the public domain. So disturbing are the scandals issuing from the office that Leaks.ng, a whistleblowing platform created by a coalition of media and civil society organizations, recently did a two-part investigative report highlighting the mind-boggling corruption and high-handedness allegedly perpetrated by Amobi.

In one of the multiple corruption allegations, Links.ng said it had obtained documents showing that Amobi “fraudulently paid at least N2 billion to two power generating companies, OmotoshoElectric Genco and Olorusogo Electric Company.” The report noted that, “these illegal payments wouldn’t have been possible without MsAmobi’s insistence.” Also chronicled in the report were her illegal payments to law firms, illegal payments to a consultant, and transfer of staff without board’sapproval. And when she was asked to respond to these allegations, she did not disappoint. She acted true to type, as expected, switching to the default mode of crooked responses and raining missiles of abuse on her interlocutor. The Leaks.ng reporter lives to tell the story.

Up until this moment, two officers of NBET who rather than co-operate with her in her corrupt activities chose to frustrate her efforts by acting as whistleblowers, are being punished for doing the right thing. Amobi has removed Sambo Abdullahi, Deputy General Manager and Head of Internal Audit, and Waziri Bintube, General Manager and Chief Finance Officer, from their duties and brought in staff from the Office of the Accountant General of the Federation to do their work. Both have also been denied their salaries and other entitlements since December 2017.

Although Sambo still goes to the office daily, he does no work and this year in furtherance of the reprisal, there would be no annual leave for him. Waziri, on his part, has stopped reporting at the office since he learnt one morning that Amobihad come with the police to the office to arrest him. As they closed from work one evening in July 2018, he and Sambo were summoned to the DSS headquarters and detained for 24 hours, after being confronted with the petition they had earlier written against their boss. Perhaps, with the memory of that horrific experience still lingering, Waziri decided it’s better for him not to come anywhere near the office.

But Amobi isn’t ready to relax the screw on these officers just yet. She has refused to comply with at least two directives from the Ministry of Power, Works and Housing asking her to treat these officers like the other staff, return them to their duty posts and pay them their salaries and other benefits. These directives, issued separately on February 6 and March 20, 2018, followed the report of an investigative committee ordered by Fashola which considered the petition of the victimized officers.

Truth is, in the reckoning of the NBET boss, Fashola does not exist, let alone a report of the committee he initiated. On this NBET crisis, there is hardly anybody MsAmobi has not attempted to compromise, including Ahmed Isa of the Human Rights (Brekete)Radio, who is determined tounravel the truth despite sustained underground efforts to get him to back down. By letter and through radio announcement, Isa had invited Amobi many times to come state her case, but she has refused to honour the invitation. It is the natural disposition of somebody who has something to hide.

This is revealed by her hiring of public relations consultants and recruitment of influential personalities and activists to help put in good word andshore up her public image. In some government offices where the petition by the two whistleblowers had surfaced—Office of the Secretary to the Government of the Federation and Nigerian Electricity Regulatory Commission (NERC), for example—she is getting willing collaborators to help do some cover-up, such as the advertorial NERC shamelessly published in some national newspapers last week.

At this point, therefore, it is important to remark that for Dr. Marilyn Amobi to be this audaciously disrespectful of her superiors, brazenlydefying orders from her immediate boss and flouting institutional rules and regulations at will, she must be riding on the back of a higher force or forces, not anywhere else but somewhere in the presidency or close to it. Although the name of the Chief of Staff to the President, Abba Kyari, has popped up in the public as her “godfather,”Amobi herself has been heard on occasions dropping the name of the vice president, Yemi Osinbajo, in a manner suggesting thatthe VP fully endorses her work.

Whoever Amobi’s backer(s) is/are, it is unlikely to include President Muhammadu Buhari who has used every opportunity to restate his resolve to fight corruption with renewed determination. The president must realize that corruption in the energy sector is symbolized in large part by the rot in NBET under its current leadership. And the apparent unwillingness to confront it with courage, among others, is one of the reasons the anti-corruption war has been described as ineffective in some quarters.

In one of his outings in the aftermath of his recent re-election for a second term as president, Buhari had urged Nigerians to brace up for tougher years ahead. More than anything on his plate, that toughness should be seen henceforth in the manner he deals with corruption on all fronts, and NBET presents him with a golden opportunity to wield the big stick. He should kickstart his stated resolve to sink his teeth deeper into corruption by immediately sacking Amobi and initiating a public investigation to expose the rot Amobi has been fighting hard to hide.

But before then, Buhari should direct immediate compliance with the directive of the Ministry of Power, Works and Housing as it concerns the whistleblowers.It’s the least he can do if his administration is serious about encouraging citizens to report corruption.

Godwin Onyeacholem can be reached through [email protected]