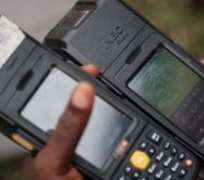 As the nation prepares for next Saturday's state governorship and Houses of Assembly elections, a major crisis is brewing as some candidates for the contests, particularly from the Southern part of the country, have vowed to stop the use of Smart Card Reader (SCR) during the polls.

THISDAY learnt that the candidates are miffed by what they call the selective application of Independent National Electoral Commission's (INEC) regulation on the use of the electronic device that was introduced in 2015 to make the accreditation process more transparent.

However, there have been allegations that the device is prone to manipulation even as it is further alleged that while the electoral body rigidly enforces its use in the South of the country, it is loosely applied in the North, enabling the upper part of the River Niger to return massive votes to the disadvantage of the lower part of the river where votes are suppressed.

Some of the candidates, who expressed their misgivings to THISDAY, therefore, said they were already mobilising their arsenal to fight the use of the device to a standstill in the election coming up this weekend.

“You would recall that in 2015, there was manipulation of the card reader. Whereas it was not sensitive in the North, it was ultrasensitive in the South, so much so that even Dr. Goodluck Jonathan, who was the sitting president, had to try about six times before his finger print was authenticated,” one of the aggrieved candidates, who would not want to be mentioned said, adding: “You have seen how, again the device has been manipulated in 2019 with its virtual non-application in the North and strict use in the South.”

Claiming that despite their protest of the discrepancy, INEC did nothing about it, he said they are ready to use all means possible to stop the use of card reader on Saturday in the South.

“We cannot operate the same regulation in different ways in the same country. We have seen that the commission is not ready to enforce uniformity of the regulation on the card reader and we are no longer going to allow it,” he said.

For accreditation of voters on election day, INEC states in clause 8(b) of its regulations: “No person shall be allowed to vote at any Polling Unit/Voting Point Settlement/ Voting Point other than the one at which he/her name appears in the Register of Voters and he/she presents his/her permanent voter card to be verified by the Smart Card Reader, or as otherwise determined by the commission.

It stated further in clause 10(a): “In accordance with Section 49 (2) of the Electoral Act, a person intending to vote shall be verified to be the same person on the Register of Voters by use of the Smart Card Reader (SCR) in the manner prescribed in these regulations and guidelines.”

It prescribed the manner in clause 10 (d): “The accreditation process shall comprise reading of the Permanent Voter's Card (PVC) and authentication of the voter's fingerprint using the SCR; checking of the Register of Voters and inking of the cuticle of the specified finger of the voter”

It warned: “Any poll official who violates the provision of Clause 10 (a) shall be deemed to be guilty of an offense and shall be liable to prosecution.”

He said: “We are not aware of any move to jettison the use of card reader during the governorship election. It is not factually correct that card reader was not used during the presidential election.

Actually the Peoples Democratic Party (PDP) had complained about the selective application of the regulation on card reader, saying while it was strictly enforced in South as a strategy to supress votes in its stronghold, the device was sparingly deployed in the North, where the ruling All Progressives Congress (APC) returned jumbo votes.

The Chairman of the Independent National Electoral Commission (INEC), Prof. Mahmood Yakubu, had declared President Muhammadu Buhari of the APC as the winner of the presidential election conducted last Saturday.

Overall, Buhari put up a good showing, winning 19 states across four of the nation's six geo-political zones. In his kitty were North-west, North-east, North-central and South-west, conceding 17 states and only South-east and South-south to Atiku.

The closeness in the number of states won did not help Atiku as unlike Buhari he was unable to poll the big numbers from his South-east and South-south strongholds.

Suffering severe cancellation of polls and results due to violence and Smart Card Reader (SCR) failures, Atiku could only poll 3,926,717 votes from his base. The rest of his ballots that came from Buhari's comfort zones were too meager to help him carry the day.

For instance, in Atiku's stronghold of Rivers State, election could not hold in six of its 23 local government areas due a lock down by the military, leaving him with a mere 473, 971 votes.

Pained by the emerging outcome of the contest, the Deputy Director-General (Administration), PDP Presidential Campaign Organisation and former Minister of Special Duties, Mr. Tanimu Turaki (SAN), had at noon called on INEC to abort collation of result and address concerns of his party.

He demanded that results from Yobe, Zamfara, Nasarawa and Borno States should be cancelled.

He said the electoral umpire should stop the announcement of results until data from the smart card reader accreditation at the polling units are made available to all the parties in the election.

Arguing that in line with his party's commitment to a transparent, free and fair election, it demands for an immediate halt to the on-going collation of results by INEC.

Turaki said: “The PDP predicates its demand on available evidence to the effect that data from the card readers are being reconfigured to suit the manipulations, rigging and over-voting already carried out during the election in some states by the APC.”

According to him, the PDP National Chairman, Prince Uche Secondus has communicated the PDP position to the INEC Chairman, Prof. Mahmood Yakubu, saying “We have evidence from the smart card reader accreditation data that what is being announced by INEC has been seriously tampered with and manipulated. In the meantime, we demand the immediate and outright cancellation of presidential election results in Yobe, Zamfara, Nasarawa and Borno States as submitted by INEC presiding officers and ask for the conduct of fresh elections in these states.”

According to him, “This is a clear case of over-voting which, by the provisions of the Electoral Act, renders the election null and void. In such instance, the law provides for another election on a day to be fixed by INEC.

“In Zamfara State, no actual voting took place and there was no single result sheet in any polling unit in the entire state. There was an arrest in Shinkafi local government, where an APC member was caught thumb-printing ballot papers inside his house.

“Results from the presiding officer from Zamfara were concocted and allocated according to the wishes of the leadership of the APC and INEC,” he alleged.

Emphasising the opposition's position, Turaki said: “The PDP therefore demands the outright deletion of the results from Zamfara from INEC records and a conduct of free, fair and credible presidential election in Zamfara State.

“Also in Borno State, there was no election but a figure writing exercise and allocation of results according to the whims and caprices of the APC leaders. We also demand the outright deletion of the results from Borno from INEC records and a conduct of free, fair and credible presidential election in Borno State.

“In Nasarawa, the PDP demands the immediate restoration of our over 157,000 lawful and valid votes which were unlawfully and arbitrarily cancelled by INEC and the announcement of the actual results from the field.

“Similarly, the PDP demands an immediate restoration of our over 79,000 valid votes which were unlawfully cancelled by INEC in Kogi State and the announcement of the authentic results inclusive of the restored 79,000 votes.”

Turaki stated further that “In the Federal Capital Territory (FCT), the PDP demands the restoration of 27,000 valid votes unlawfully and arbitrarily cancelled by INEC and a declaration of the authentic result, inclusive of our restored 27,000 votes.

“In Plateau, the PDP demands the immediate restoration of our over 30,000 lawful and valid votes, which were unlawfully cancelled, particularly in Jos North and the declaration of the genuine results as delivered at the polling units, inclusive of our 30,000 restored votes.”

Turaki said his party is therefore calling on Nigerians to disregard the results until INEC provides the data from the smart card reader accreditation at the polling units, conducts fresh election in Borno, Yobe and Zamfara States as well as restore PDP votes in Plateau, FCT, Kogi and Nasarawa States.

“The PDP maintains that from the actual votes delivered at the polling units, which we all have, Nigerians clearly and unequivocally gave their mandate to Atiku Abubakar,” Turaki maintained.

He was ignored as the electoral body proceeded with the exercise and concluded it this morning with the declaration of Buhari as the winner.

Shortly before Yakubu made his return on Wednesday morning, the PDP's chief agents at the collation centre, former minister of Aviation, Chief Osita Chidoka, vehemently protested what it called selective use of the smart card reader (SCR) in a significant part of Northern states, saying since it was a breach of INEC's guideline, the results of the presidential election ought to be reviewed.

Raising other sundry concerns about the conduct of the election, including the deprivation of about 5.1 million voters from participation due to cancellation of votes arising from card reader infractions and violence, the party called for the suspension of declaration of returns until its concerns are addressed.

Some of the candidates for next Saturday's elections told THISDAY yesterday that they would rather prevent than seek cure for “an injury certain from the selective use of the card reader.”