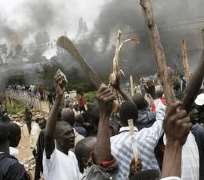 Bloodbath and death toll is already mounting in Ebonyi State, South East Nigeria as the candidates of the People’s Democratic Party PDP, All Progressive Congress APC, Social Democratic Party SDP and National Rescue Movement NRM battle for who governs Ebonyi State come May 29th,2019. Igbo Mandate Congress had received reports from their coordinators in Ebonyi State that the death tolls in the past three months have reached twenty.

Two persons Igwe Ukwa and Egbe Oruke, were killed recently at Amagu, ward one, Ikwo Local govt area when the agents of the PDP and APC clashed. Twenty vehicles were destroyed and thirty houses in communities in Izzi local government when thugs of PDP and APC clashed. APC had alleged that soldiers and community vigilante groups are being used to harass and kill their supporters. The PDP State Chairman, Chief Onyekachi Nweboshi and his APC opponent, Chief Eze Nwachukwu had traded blames over the bloodshed. The police chief in Ebonyi State Mr Awosola Awotunde had tried to bring peace but to no avail. Reports reaching IMC shows the state will be engulfed in bloodbath before and during the governorship polls if restraint flies away.

The incumbent Governor Dave Umahi who had earlier boasted in 2018 that he has no opponent in Ebonyi State had found out that the candidate of the APC, Senator Sunny Ogbuorji, and candidate of the NRM, Rev Gold Paschal Nwaigwe has become a thorn in the flesh. Also the SDP candidate is also breaking new grounds.

Governor Umahi who flaunts his achievements especially the translation of Abakaliki to a modern city within a space of three years is being criticized by his opponents in both the APC and NRM of cornering the contracts to his cronies and laying a huge tax regime on the state.

Barrister Chibuzor Agbo of the Social Democratic Party had promised to translate the state into a huge construction site of accelerated infrastructural development.

Senator Ogbuorji hopes to leverage on the federal might and increasing popularity of the APC in the state to oust the incumbent. The candidate of NRM, Rev Paschal Gold Nwaigwe, a popular youth leader in the state has been doing a grassroots campaign, meeting community leaders, youth and market women in small hamlets and promising them inclusive government.

Rev Nwaigwe who earlier contested on the platform of African Democratic Congress,(ADC) in 2015, coming sixth with 30,000 votes believes that with a free and fair election, he will defeat both the incumbent and the candidate of the APC.

Rev Nwaigwe was denied APGA ticket by Victor Oye on the grounds that he lacked requisite financial war chest to battle the incumbent. This stance drew the ire of Governor Obiano of Anambra State who reportedly expressed surprise that APGA had no governorship candidate in Ebonyi State. Former Governor of Anambra State, Chukwuemeka Ezeife in a text message to APGA National Chairman, expressed surprise that” a key Igbo State like APGA has no governorship candidate”. Due to criticisms, APGA appointed Mr Ricky Okorouka as the Governorship candidate and the party had since faded into oblivion in the state.

Billboards belonging to the APC are being pulled down by PDP agents and vice versa while posters of the NRM are being removed by thugs from both parties. Political thugs hangs in corners of Nkalagu, Ezillo, Ohaozara ,Ohaukwu, Ikwo and Afikpo waiting to unleash mayhem at the opponents.

The State Deputy Campaign Coordinator of National Rescue Movement NRM Ms Ginika Nguji was severely stabbed by a PDP political thug identified as Shedrack Nworie while posting NRM campaign publicity materials at Arugo Ward, Ejiaji Umuara and she is still in the hospital.

Mrs. Maria Ude Nwachi, an aspirant contesting for the House of Representative under Alliance for New Nigeria ANN has also been severally targeted and seriously attacked by PDP political thugs She was seriously wounded in the attacks and her car riddled with bullets.

Barrister Oluchukwu Ugbo, the House of Assembly candidate of Peoples Party of Nigeria (PPN) has been attacked thrice in two months along Ezullo and within Abakaliki. He was attacked again on the 17th of February and his vehicles riddled with bullets and glass smashed by dangerous weapons.

The Director General of Igbo Mandate Congress, Rev Obinna Akukwe had called upon the fighting elephants to sheathe the sword in the state. Addressing leaders of IMC at Enugu yesterday, Rev Akukwe asked them to continue to preach peace to the gladiators. “You should continue to preach peace, how can we have twenty death and yet the governorship elections is yet to occur. It is a shame to the Igbos that we cannot handle our affairs peacefully. We blame others for our woes and fail to blame ourselves for our misdeeds” He asked the IG of police to deliver Ebonyi State from self-destruction