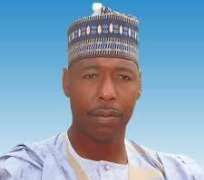 The Court of Appeal sitting in Jos, Plateau State on Friday, dismissed two separate appeals, one of it filed by a serving Director of Finance, Federal Ministry of Agriculture, Idris Mamman Durkwa, who is challenging the election of Professor Babagana Umara Zulum at the APC governorship primaries in Borno state held in October, 2018.

Deapite that fact that he retained his job as a director, Durkwa contested the governorship primaries under the platfiem of the APC and lost out which informed his decision to take the party, APC, the governorship Candidate, Prof Zulum and INEC to court to challebge the return and declaration of Professor Banagana Umara Zulum as the Governorship Flag bearer of the party in the forthcoming governorship electtion.

While in another case, the Court of Appeal sitting in Jos, dismissed an appeal filed by Hajja Fati Kakinna Alkali Monguno who is also challenging the election of the incumbent Senator representing Borno North at the Senate, Senator Abubakar Kyari who was re-elected at the APC senatorial primaries for Borno North.

It was also gathered that Kakinna had earlier lost to Kyari at the primaries before filing a case against the APC as a party, senatorial candidate , Abu Kyari and INEC who contested last Saturday and was re-elected.

Presiding judge, Justice TY Hassan delivered the ruling that was concurred by Justices M.N. Oniyangi and B.M Ugo who jointly reviewed the appeals with reference numbers CA/J/50/2019 and CA/J/49/2019.

Durkwa and Kakinna, both represented by the same counsel, Ibrahim Bawa, had appealed the judgment of a Federal High Court sitting in Maiduguri which upheld a preliminary objection filed by Yusuf Ali, SAN, on behalf of the Professor Zulum, Senator Abu Kyari, the APC and INEC who are defendants.

Ali had argued that whereas the electoral act allows 14 days within which both Durkwa and Kakinna where to file petitions in court, challenging the primaries, they filed the petitions after the fourteen days had elapsed.

On the strength of Ali’s argument, Durkwa and Kakinna attempted to “smuggle in” reports by APC’s appeal committees on the governorship and national assembly primaries which delayed their filing of petitions since they needed the appeal committees’ report as part of their arguments.

The Federal High Court in Maiduguri had ruled in favour of Yusuf Ali’s preliminary objection refusing amendment of originating summons by Durkwa and Kakinna.

Realising they may lose the case without amendments, Durkwa and Kakinna separately approached the Court of Appeal to reverse the ruling by the Federal High Court in Maiduguri.

The Appeal court in Jos however dismissal the two appeals. The case now returns to Maiduguri, with hearing fixed for March 11, 2019.