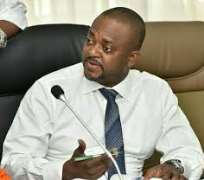 The leadership opportunity offered by the charismatic and youthful Ogugu blooded Chief, Edward Onoja, in Kogi’s political chronicles can be likened to the biblical emergence of Moses for the Israelites in the land of Egypt. While many have reduced his (Edward’s) emergence and stride to mere timeousopportunism, many more see it as long awaited particularly in a zone where past leaders of older demographics in similar or higher positions of authority could not perform acts such as is been witnessed today.

Edward Onoja or simply, Eddy, ARAGA 1 or the Don as he is fondly called by both lovers and haters and lovers alike has been a phenomenon in the politico-economic lexicon of Kogi State since clinching the position of the CoSto the executive Governor of Kogi State in 2015. He has risen in fame and influence ever since, and daring to redefine the political algebra and pulse of the state.

Edward’s politics is different. He believes in, and is 110% loyal to his boss, Governor Yahaya Bello (GYB), who proudly addresses him as his twin brother. Widely addressed too as the White Oracle of the New Direction Movement of the present administration, many have disregarded this “unassuming” personality to their peril.

With the eagle gaze, CEDO is as never, focused on the broad political spaceand gains for his people, projecting decades beyond now with startlingantidote for our many developmental challenges as a people and state.

Look at the just concluded Presidential elections, where he emerged as the DG of Kogi State’s Presidential Campaign Council. That is phenomenal in the history of the zone and all must rise to congratulate, encourage and support the lad for greater exploits because wherever he is, he has proven to know his own and many others not related by blood or geography. The analytics of the outcome show a clinical delivery of the state to the agreed course in an outstanding manner.

In Kogi state, the Oracle had right from inception in 2016, ensured regular door to door engagement with the electorate, whom he often told would remain connected to the administration all through and not only during elections as a departure from the past. This promise interestingly, was kept, as the Chief ensured all appointees remained perpetually glued to their Wards and polling Units before, during and after the elections. The result is the overwhelming delivery of Kogi East (KE) to the APC for the NEXT LEVEL agenda.

Edward is a multi-personality enigma who approaches issues from very analytical and scientific points of view, taking decisions that would serve the general purpose. For instance, when he insisted that constituency allowances of KogiEast (KE) appointees be pooled into a broad project account disbursable during festivities and other agreed times for welfare purposes, many were introverted in their anger and wished the funds were released to them like in previous administrations to spend alone. Nay! The funds, together with the Chief’s privately organized funds, provided the many welfare items, boreholes, town halls e.t.c pervading the entire eastern flank, today.

As it were, the strategy was then recommended in Exco by the executive governor to the other Zones for adoption. It was the White Oracle’s strategy in keeping the proverbial “eye contact” with the electorate upto Election Day. It paid off. Look at a typical result fromOguguWard II in the just concluded Presidential elections, across Olamaboro LGA, inspired by Chief Edward Onoja’s leadership.

The table below as is modeled across the local government delivered 100% for the APC across board except for the Senate which was declared inconclusive by the opposition theatrics.

For Ward II from where the above result was posted, it was evident that the Chief of Staff to the Governor had confidants on ground to foot soldier and deliver the votes for his principals because he had given so much to their sons and daughters in appointments, scholarship, medicareemployment and so on. Specifically, the Ward is grateful and it is on record that the Chief of Staff facilitated the appointment of the Special Adviser to the Governor on Health –Dr. Ahmed Attah, Director General, Bureau of Public Private Partnerships –Arc. Bob Achanya, Permanent Secretary, Kogi State Ministry of Agriculture –Elder Emmanuel Idenyi, Member, Olamaboro Local Government Council –Mrs. Okibe, Director, Kogi State Medical Diagnostic Centre, Ayangba –Dr. Akogu and a host of other categories of appointees, it was easy for the lot to work along with the Chief of staff to deliver the Ward for the APC and our leader, the Chief of Staff as the Ward once again, laid the foundation for greater government patronage once again. It was great having Dr. Attah lead the Five Polling Units in his Adupi axis while Bob Achanya led the other five Polling Units in the Ofante axis to deliver one of the best results in the history of the Ward largely due to the huge support from the Chief Strategist himself. The Ward will always answer when the Chief comes calling, as shown in the outcome of the presidential election just gone by.

Futuristically, a cursory projection into future electoral outings can easily be deduced, more so that the zone has remained the traditional base of the “Audu political Legacy. The school of thought has been tested over and again and proven even at the ongoing polls.

The general elections result is the reward for hard work by the Chief of Staff and indeed, a taste of the electoral pudding and the required leadership statement. The strategy appear right, haven delivered on the APC Next Level brand including the HoR and by the Grace of God, the Senatorial seat come March 9th, 2019 when the zone shall deliver again, the House of Assembly and Senate seats for the APC. There is indeed, the required ground swell of followers and electorates to sustain the movement. Indeed, March 9th, 2019 beckons!

Today, all hands must come on deck to ensure the House of Assembly results posts another fantastic statement for the zone and in particular, Olamaboro LGA for a convincing CEDO trademark.

This is for the bigger GYB Next Level picture and a sustainability drive that will not leave room for divisive fronts thus ensuring the attainment of a united APC beyond 2019 attainment.

For us, CEDO is our beloved son in whom we are well pleased. The Olamaboro and entire Kogi East are proud of their son and urge him to carry go, confident that he, along with the other leaders, would provide the winning strategy for achieving the overall GYB Next Level objective after the PMB/PYO Presidential reelection. Kogi is good away from opposition to the central government today and it must be sustained. That is the message.