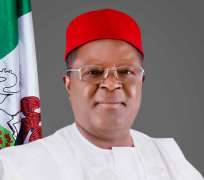 Widows, Christian Association of Nigeria, CAN as well as Muslim community and market women have contributed money to fund the reelection of Governor David Umahi ahead of the March 9th Governorship election in the state.

The Coordinator of Widows in Ebonyi State, Magistrate Stella Ogoke disclosed this yesterday while briefing the governor on the preparedness of the widows who have been empowered by the state government ahead of the general election next week during a townhall meeting with the Governor at the Akanu Ibiam International Conference Centre Abakaliki.

“The widows on their own have been indoors since to seek the face of God ahead of the reelection of the Governor and on our own, we have contributed N500 each among over 2000 widows whom you have empowered towards your election. We decided that we are going to give you the money to buy cow and other things you will use to receive visitors who will be coming to congratulate you on your reelection after March 9th Governorship election “

On his part, the State Chairman of CAN, Rev Fr. Abraham Nwali said the church in the state have adopted the Governor for the second term because he has delivered on all his campaign promises.

Fr Nwali said the church will always stand by the Governor, noting “since you are not ashamed of the Gospel of Christ, the church will not be ashamed to stand with you. We have made personal contributions toward your election because we know you are a child of God. CAN made it clear even at the National level that we are standing with you fully because we want a man of God like you to continue to be the Governor of Ebonyi State”

In her speech, the leader of the market Women in the state, Mrs. Rose Akochi said all market women in the state also made various contributions towards the reelection of the governor because of his commitment to the economic viability of the state.

She said beyond financial contributions by all the market women, they have also mobilized themselves to vote and protect their votes, saying that no force can be superior to that of God who has ordained the reelection of the governor.

Th leader of the Muslim Community in the state, Alhaji Lukman Alkali while making his contribution said the entire Muslim community decided to fund the reelection of the governor because he has developed all sectors of the state economy simultaneously and has united all segments of the state under one indivisible entity.

Alkali said Ebonyi State has remained peaceful with all ethnic nationalities living in peace irrespective of political affiliation and maintained that all members of Muslim community in the state have been mobilized to vote massively for Governor Umahi in the next week Governorship election in the state.

Responding, Governor David Umahi promised to continue to pilot the affairs of the state with greater fear of God for the next four years if elected back into office.

He commended all the groups for their solidarity and assured them that all the promises he made during the electioneering campaign will be kept and fulfilled.