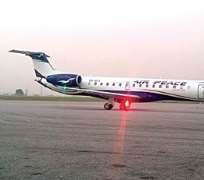 The airline, on the maiden flight to Bayelsa, operated a 50-seater Embraer 145 jet, as part of the no-city-left-behind project.

The flight, operated by Capt. Crosby Otobo and his crew, took off from the Murtala Muhammed Airport, Lagos, at about 2.50 p.m. and landed on the 3.5-kilometre runway of the Bayelsa International Airport at about 3.35 p. m. last Thursday.

The flight was welcomed by a crowd of excited indigenes and residents of Bayelsa, including the State Governor, Henry Seriake Dickson, and top government officials.

Men of the Fire Service Department honoured the flight with a water-salute.

Air Peace’s Chief Operating Officer, Oluwatoyin Olajide, touted the airport as a vehicle for industrial and economic development of the state.

Olajide commended Dickson for undertaking the International Airport project, as part of the rapid industrial and economic development of the state.

She noted that Air Peace had contributed to the development of cities and states in the last four years of its operations.

“We have no doubt that the Bayelsa International Airport will provide us an opportunity to support the effort of the Bayelsa State Government to develop the state.

It is, indeed, a new dawn for the people and residents of Bayelsa State.

We urge the flying public and the business community to take advantage of this wonderful facility to break new grounds and realise their business and leisure interests,” Olajide said.

Recall that Air Peace recently acquired five 50-seater Embraer 145 aircraft, as part of its goal of unifying Nigeria through air transport, and extending its flight operations to unserved and underserved cities.

Spokesperson of the airlines, Chris Iwarah, said the carrier is committed to the no-city-left-behind project, under the Air Peace Hopper subsidiary.