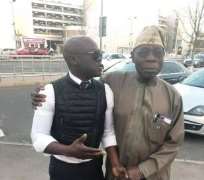 Ex-president Olusegun Obasanjo has arrived London few hours after he was spotted at an airport in Nigeria. His trip is coming days after the presidential and national assembly elections which were held last Saturday. Since the announcement of the winner of the Presidential election, the former President have not commented on it.

It will be recalled that former President Obasanjo campainged vigourously against the candidacy of President Buhari. It is suspected that he may make appearance on a BBC program concerning the Nigerian election.