DESCRIBED IT AS WELL DESERVING
By Uche Onwuchekwa 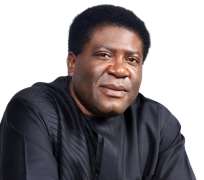 The Deputy Governor of Imo State, Prince Eze Madumere has joined other patriotic Nigerians to congratulate President Mohammadu Buhari on his resounding victory at the February 23, 2019 presidential election.

The Deputy Governor who made the remarks while speaking to described Mr. Buhari's victory as well deserving.

Madumere however commended the electorates for coming out en-mass to re-elect President Buhari. He attributed Buhari's re-election to hard work, fulfillment of his Electoral promises and resolute stance against corruption.

On what to expect in the new dispensation, he said: "I assure Nigerians of a better deal in APC Next Level mantra. President Buhari led government will bring about sustained economic prosperity, more united and cohere Nigeria where security, peace and tranquility of the citizenry are assured"

He reminded them that President Buhari has brought honesty, discipline and integrity to governance, insisting that Buhari has kept to all his Electoral promises. He also remarked that Buhari has remained focused with his eyes always on the goal.