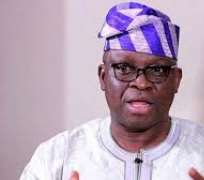 Fayose commends Nigerians, says; “No victory songs for Buhari” Immediate past Governor of Ekiti State, Mr Ayodele Fayose has congratulated and commended Nigerians for the courage to stand against what he described as “gun-point democracy,” describing the victory of President Muhammadu Buhari in the last Saturday’s presidentia election as one which was secured “at the barrel of the gun” and deserving no celebration by the winner.

Fayose, who reacted in a statement on Wednesday, by his Media Aide, Lere Olayinka, said; “Rather than a word of congratulation to President Buhari, who will be leading our country against our wish as a nation, Nigerians are the ones who deserved to be praised for their courage.”

He described the roles played by the Independent National Electoral Commission (INEC) and security agencies in the election as shameful, saying “their inordinate and inglorious desire to deprive Nigerians of a credible leadership was made manifest from the start.”

The former governor said the brazen manner in which the election was conducted and “won” further played out the reason Justice Walter Onnoghen was removed as the Chief Justice of Nigeria. He said; “At the barrel of the gun, today, Nigerians are cowed and captured evidently by the non-celebration of this Pyrrhic victory byanyone in Nigeria except those who hoped to benefit directly from it, which is characteristics of a thief that came in the night to depriveresidents of their belongings, leaving them in anguish and nightmare.

a bare-faced rape on democracy.
“Rather than celebrating today, Nigerians, especially those whose

the country are moody and sad. However, in their quiet moment, they

subjecting others to perpetual sorrow.
“Definitely, the blood of those innocent Nigerians that were murdered

just to actualize this inordinate ambition will speak justice on the

heads of the perpetrators and beneficiaries of the killings and also

speak better things for our tomorrow, having paid the supreme prize.”

While reiterating his avowed commitment to the defense of the

oppressed in the country, the former governor said; “As already known,

I am not afraid of arrest and detention. I have been persecuted and

will remain undaunted.
“Let me therefore commend Nigerians and tell them that they should

note lose hope because help will come someday.
“As for the President; no victory songs for him, he should rather

begin a soul-searching, constantly asking himself why he opted to drag

which votes were merely allocated to candidates.”