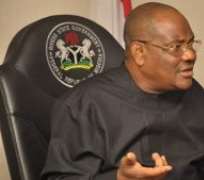 Maj.-Gen. Sarham paraded the 35 suspects Tuesday through 6 division's Deputy Director, Army Public Relations, Col. Aminu Iliyasu, at a crowded news conference at 6 division, Port Harcourt on the discoveries and arrests made by troops of the formation, in conjunction with other security agencies, for electoral offences between February 22 and 23.

All the 35 suspects were handed over to the Deputy Commissioner in charge of the Criminal Investigations Department (CID) of Rivers Police Command, Ahmed Kontagora, who represented the Rivers state Commissioner of Police, Usman Belel, at 5:50 p.m. Tuesday.

The Assistant Director, Public Relations of the National Youth Service Corps (NYSC) in Rivers, Violet Appolo-Ibizugbe, also insisted that no corps member died in the state during last Saturday's Presidential and National Assembly polls, contrary to insinuations making the round.

Appolo-Ibizugbe said: “Rivers State NYSC management has been inundated with the rumour of the death of a corps member during the last Presidential and National Assembly elections in Degema Local Government Area of Rivers State on February 23. Management wishes to inform the general public that no corps member was killed before, during and after the February 23 elections.

“While we commiserate with the family of the late Mrs. Ibisaki Amachree, an INEC ad hoc staff member, who unfortunately died on her way back from electoral duties in Degema LGA, we wish to state that she was not a corps member and that NYSC, Rivers State did not lose any corps member during the February 23 elections.”

The GOC also disclosed that a lot of maneuvers by political actors were witnessed in the division's Area of Responsibility (AOR), covering Akwa Ibom, Bayelsa, Delta and Rivers states, during last Saturday's elections.

He noted that the maneuvers were normal in a democracy, but stressed that most worrisome and dangerous was the employment of political thugs by some desperate politicians to disrupt a legitimate national process for their pecuniary gains.

Maj.-Gen. Sarham said: “Equally of grave concern is the daring attempt by the Governor of Rivers State, Barr. Nyesom Wike, to compromise security agencies, particularly troops of 6 Division, with hefty financial inducements to help him in his illegitimate act of thwarting a free and fair electoral process to his favour, while accusing the Nigerian Army and its command hierarchy of bias daily.

“Apparently, Governor Wike must have underestimated the Nigerian Army's commitment to being professionally responsive in the discharge of our constitutional roles.

“The Chief of Army Staff (COAS), Lt.-Gen. Tukur Yusuf Buratai, has overtime reiterated and demonstrated the Nigerian Army's resolve to being apolitical, neutral and unbiased. He (COAS) has also left no one in doubt of our total and absolute loyalty to the Constitution of the Federal Republic of Nigeria and the President/Commander-in-Chief of the Armed Forces of the Federal Republic of Nigeria (President Muhammadu Buhari).

“No amount of cheap blackmail and unsubstantiated allegations will make us bulge. While we do not intend to take issues with any one, however, it has become expedient to bring to the notice of the general public the actual reasons behind Governor Wike's attrition against the Nigerian Army and its leadership, with the hope that he will finally sheathe his sword and publicly apologise to the Nigerian Army, as we present the shocking discoveries.”