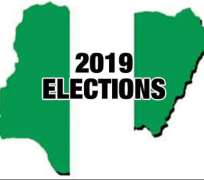 The Independent National Electoral Commission (INEC), as an electoral body saddled with the constitutional responsibility of conducting elections across Nigeria, after a thorough scrutiny accredited reputable Civil Society/Non Governmental Organizations to serve as both domestic and foreign election observers for the 2019 General Elections in Nigeria.

Our coalition has noted with dismay the unprecedented affront in the falsification of the just concluded Presidential election results in Nigeria due to massive falsification of figures during collation, abduction, intimidation and harassment of INEC staff and electorates and wide spread violence across the country.

We have evidences of varying degrees that results from different states of the Federation has been mutilated, falsified and changed to sooth the candidate of the APC, President Mohammadu Buhari.

It is our firm belief that the incumbent President Mohammadu Buhari is the greatest beneficiary of a transparent, free, fair and credible elections in Nigeria and as such should sustain same template across the country.

The current process where state election results are being doctored to sooth PMB is therefore regrettable and unacceptable.

We hereby call on the International community, the media, Foreign and Domestic Observers to urgently save the Nigerian democracy which is on transit to death.

OUR OBSERVATIONS.
* We observed that elections commenced later than the stipulated threshold of 8am across the country. There were instances of lack or unavailability of the police for escort of the ad hoc staff and sensitive materials (Form EC8A and ballot papers) to designated polling units. This basically was the cause of delay on the arrival of sensitive materials and consequently the delay in the commencement time of election nationwide.

* In line with International best practice, policemen in the polling units are NOT expected to carry firearms. But the near or complete absence of armed law enforcement agents few polls from the polling units gave room for thuggs and hoodlums to snatch ballot boxes, intimidate and molest electorates, and unleash mayhem on law abiding citizens as the case may be. Policemen at the polling units were often overwhelmed by the large number of thuggs.

* The role of the military in elections and consequent rule of engagement in elections were clearly and consistently violated. We observed the military in states like Akwa Ibom, Rivers, Imo, Cross River, Kogi, Kano, etc, order electorates, observer, some party agents out of collation centres for the sole aim of falsification of results in favour of a preferred candidate. This is an aberration of modern democratic tenets.

* In some instances in Akwa Ibom state, Rivers, Imo, Cross River, Kogi, Kano, etc,the law enforcement agent were observed fire sporadically into the air and snatching ballot boxes away themselves.

* Again, in the full glare of the Military and the I.G.P. squad of the Nigerian police, hoodlums loyal to Senator Akpabio assaulted foreign and domestic observers in Ukana, Essien Udium LGA of Akwa Ibom state, seizing and destroying their Tabs, phones and other personal effects. Some of the victims are still in the hospital receiving urgent medical attention as at the time of this briefing.

* The Smart Card Reader (SCR) were not used in several polling units across the country. This was as a result of threat to life by thuggs and hoodlums engaged by some desperate politicians. Sadly, most of the results which emanated from a process in clear violation of the provisions of the Electoral Act, 2010 as Amended were collated, declared and a winner emerged.

* We have also observed the increase in the number of deaths during the 2019 General Elections as against the number of deaths in 2015 General elections. A total of 12 Nigerians lost their lives during the 2015 General Elections. These 12 persons died as a result of Boko Haram attack. In 2019 Presidential and National Assembly Elections, 30 Nigerians were murdered in cold blood on election day as a result of election related violence. This we consider as saddening and alarming in a context supposedly civil and democratic.

The original election result is hereby annexed for your perusal.

It seems to us that Nigeria is transiting backwards to the dark ages of a near anarchy situation.

SUMMARY
We wish to state categorically clear that the lacuna and shortcomings observed in the 2019 General Election is as a result of persistent aberration consequent to the inability of law enforcement agencies to comply with the necessary electoral reforms in line with International Standards, rule of engagement, the constitution of the Federal Republic of Nigeria (1999 as Amended), and the provisions of the Electoral Act 2010 as Amended.

This re occurring decimal has become malignant in the performance index of the Law enforcement agencies in Nigeria en route free, fair, transparent and credible elections in Nigeria.

The Presidential results are hereby rejected in the interest of equity and fairness.