Nwaoboshi Appreciates Anioma Over His Victory, Makes Case For Okowa, Others 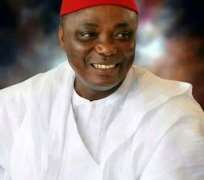 The incumbent senator representing Delta north in the National Assembly (NASS), who won his reelection to the Senate, Barr Peter Nwaoboshi, has thanked his people for voting massively for him.

Addressing party faithfuls who throng his Asaba residences thanked God and the people for his victory.

Nwaoboshi, who is the chairman, Senate Committee on Niger Delta Affairs expresses his profound gratitude to the Almighty God and the good people of Anioma for massively voting for him on Saturday, February 23, thereby giving him another opportunity to serve them.

Senator Nwaoboshi, fondly called SPON, said his victory at the polls is an expression of the people's acknowledgment of his good performances in his first tenure, therefore, he promised to do more to make sure that the Anioma nation would be proud of him.

Meanwhile, Nwaoboshi, has called on his people to keep faith and work assiduously to deliver the governor, Ifeanyi Okowa, in the March 9 governorship election.

He also tasked them to support other PDP candidates for the State House of Assembly election.