Isiak Abiola Ajimobi: The Rise And Fall Of Oyo Emperor 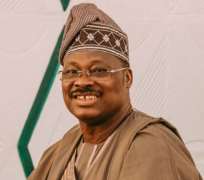 In the political history of Oyo state, no governor has received the favor and blessings of God than Senator Isiak Abiola Ajimobi. In situations where his predecessors have failed; Ajimobi has succeeded. The second term which consumed many past governors, Ajimobi transversed unhurt and even earned a nickname 'Koseleri'.

But rather than appreciate God's preferential favor and blessings upon his life; he has over the years shown boorishness through his attitude and also exhibited great disdain to fellow beings. He sees himself as the 'Alpha and Omega' of Oyo state. He has positioned himself as a man whose power can only be substituted with that of God in the last eight years.

Whether you like him or hate him, Ajimobi is a 'master in his game'. This is evident in virtually all his actions and policies. As a politician and governor, he understands how to use power at his disposal to the fullest. If you’re in doubt ask former governors- Senator Rashidi Ladoja and Otunba Adebayo Alao Akala about their experiences with Governor Abiola Ajimobi.

Another example of Ajimobi’s mastery of politics was the way he neutralized 'Unity Forum', a faction of All Progressive Congress, APC in Oyo state. Just when 'Unity Forum' members thought they had the control of the party,

Ajimobi emerged like the Phoenix from ashes and took over the party, forcing Unity Forum members to decamp to other parties. If there's one thing you can't take away from Ajimobi, it is 'ego'.

To say Boda Isiaka is arrogant and loquacious is stating the fact and humility isn’t one of his greatest virtues. Instead, complete self-assuredness bordering on smug, condescending arrogance has been the hallmark of his demeanor.

Ajimobi's congenital arrogance is no doubt one of the factors that made him to lose Oyo South senatorial seat. In Ajimobi's widest imagination, he would never have imagined that someone like Dr Kola

Balogun would end up preventing him from going to Senate. His dream of installing yet another arrogant 'puppet' as a Governor now hangs on balance. Even his anointed candidate now understands that there is fire on the mountain and gubernatorial election in Oyo state won't be business as usual.

In the last eight years at helm of affairs in Oyo state, Ajimobi's performance is nothing to write home about. Though propaganda coming from his government will make you think that he has even surpassed Lagos State in development. Under his administration, Oyo state is not only in debt but is under the grip of non-indigene contractors.

But as a smart politician, he uses propaganda very well and almost succeeded in silencing opposition, except for few ones. If there's one thing Ajimobi detests so much, it is criticism. He doesn't care using sledgehammer to exterminate a fly when it comes to criticism.

Unfortunately, Ajimobi is one of those egocentric politicians in the country today who will rather be ruined by praise than be saved by criticism. He belongs to the group of borderline personalities who instead proffering solutions to myriad of problems bedeviling the poor people has only aggravated it. Policies and programmes under his

administration are propelled by selfish interest. If Ajimobi had won the senatorial seat; he would have been boastful in

his usual ways.
For a man who disrespected the office of Olubadan of Ibadanland-did he expect 'Ose Meji' to just look the other way and allow him have his way by going to Senate again? "Eni base nti enikan oseeri, ojuu ree yoo rii nti enikan oriri".

Ajimobi's failure to win the senatorial seat for Oyo South is a lesson for all those in power and positions of authority.

We should all endeavor to do good because the only constant thing in life is change either positive or negative. We'll all be accountable for our deeds and actions one day.