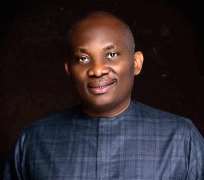 The Incumbent senator representing Delta north senatorial district in the National Assembly (NASS), Barr Peter Nwaoboshi, has won the mandate of his people in the just concluded presidential and Natonal Assembly elections to return to the Senate the second time.

Nwaoboshi, of the Peoples' Democratic Party (PDP), defeated his All Progresives Congress (APC), opponent, Doris Uboh, with a large margin to return to the Red Chambers.

Results collated from the 9 local government councils that make up the senatorial district saw Nwaoboshi, winning in tens of thousands.

Declaring the results, the Returning Officer for the Senatorial contest, Provost, Federal College of Education (Technical) Asaba, Dr. Ignatius Ezeom, said Nwaoboshi met all the requirements, "and he is hereby declared winner of the election".

Speaking in an interview shortly after he was declared winner, Nwaoboshi, fondly called by his teeming admirers as Oracle, assured his people that he would do better.

"I will improve on what I have done before and I will also try as much as possible to be a statesman and I will make sure that in whatever I do, the interest of this country will be paramount to my life and of course the interest of my people, the good people of Anioma".

On Hon. Uboh, the distinguished senator hinted that he would not make any unpalatable statements on her.

Also fielding questions from newsmen, Hon. Elumelu, who is returning to the green Chambers for the third time promised that with the corporation from his colleagues, the quest of his people for a federal University would be a dream come true.

Elumelu, who could not hide his joy thanked God for making it possible just as he showed appreciation to his people for finding him worthy to represent them.

"I will be there for them in Abuja, and I will ensure there is nothing that will come up at the national that they will miss. My desire is to make sure that we develop our place. So, to me, to whom much is given, much is expected. I will live up to the expectations of my federal Constituency", he vowed.

He also promised to follow the party manifest designed to ensure that the youths and women are empowered, "I will look at what the governor has put in place and collaborate with the state and make good laws that will make life meaningful to our people".

He also expressed thanks to the state governor, Dr Ifeanyi Okowa who gave him a good platform to sell the party to their people with ease.