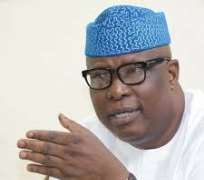 The Special Adviser to the President on Political Matters, Senator Babafemi Ojudu, has expressed optimism that the ruling All Progressives Congress (APC) will coast home to victory in the February 23 presidential election.

Ojudu, in an interview with journalists, said although there were pockets of violence in some parts of the country, APC has largedly done well in the contest and President Muhammadu Buhari is poised for victory.

"It happened things have gone well in almost all the states expect from some incidence in Rivers and Lagos.

"From reports coming in from our agents across the country, our party is doing well, we even won in all the battle-ground states. We are very confident of victory. It has shown that our messages of taking the country to the next level have resonated with the people. It shows the ordinary people of this country have come to believe in our presidential candidate and have confidence in his ability to take them to the next level.," Ojudu said.

On the call by the opposition Peoples Democratic Party (PDP) to the Independent National Electoral Comission (INEC) to declare its candidate, Atiku Abubakar, as winner of the election, the top presidential aide dismissed the call as a mere wishful thinking.

"It's wishful thinking. Even when you are drowning you still keep being hopeful. I will call on majority of Nigerians who had voted for Buhari to keep calm.

"There is no reason for anybody to panic at all. We are comfortable, I can assure our supporters and those who are following the process that President Buhari is coasting home to victory. INEC will declare the results in due course.

"It's wrong for anyone to stampede te electoral umpire to declare the results," Ojudu added.