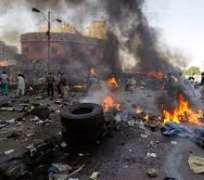 Further to the press statement released earlier today, the Command wishes to state that additional information at the disposal of the command reveals that Boko Haram insurgents attempted to infiltrate the Metropolis by launching sporadic artillery shots at Security Facilities from far distances at about 0520hrs of today. The shots which were fired probably with a view to weaken the Security forces so as to give the insurgents easy access to disrupt the elections met superior artillery power of the military.

The counter attack launched by the security forces caused the insurgents to bid a retreat.

Although some missiles strayed into vulnerable locations, no casualty was recorded.

Normalcy has since been restored and the Military, and Strike units of the Police namely SARS, PMF, EOD and CTU are on top of the situation.

Meanwhile, the election is progressing peacefully in all designated polling units throughout the state with heavy deployment of Security personnel.

The Commissioner of Police Borno State Command, CP Damian Chukwu assures members of the public of the commitment of the Command towards providing a safe and enabling environment for eligible voters to cast their votes.