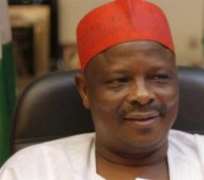 Following the recent attack on the campaign convoy of Senator Rabiu Kwankwaso that led to a bloody clash in Kofa village of Bebeji Local Government Area of Kano state that claimed no fewer than two lives, the state Police Command has arrested a member of House of Representatives, Abdulmumuni Jibrin Kofa and 70 other Political supporters and leaders.

Kwankwaso was on a campaign trail around Kofa town on Thursday when an attack on his convoy led to violent clash with supporters of the APC, Abdulmumuni Jibrin Kofa resulting to the loss of lives.

Both parties pointed accusing fingers at each other as to who started the violence for which the House of Representatives member Abdulmumuni Jibrin Kofa said resulted in the burning down of his sixty campaign vehicles. The Police PPRO DSP Abdullahi Haruna Kiyawa, told newsmen that they arrested 70 persons across the two political parties including party leaders and also invited Kofa for interrogation.

However, the PPRO noted that only two persons were killed in the clash while several others were injured. 20 cars were burnt and 18 other Political Campaign vehicles shattered. More so, he added that a community clinic has also been burnt down but no house was either touched or put on fire.

“We invited Kofa for interrogation for the police to have more details as to what exactly happened,” the PPRO said.