Re-Ordered Election Day Killing: Buratai & His Squad Of Kaki Goons Risk Kissing The Iron Bars Of The Prison For 1000 Years (Each) Without Parole

By Southeast Based Coalition of Human Rights & Democracy Organizations (SBCHROs) 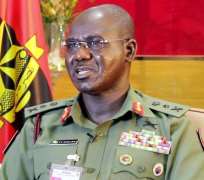 Having already been swimming, inescapably and damnably, in the blood of thousands of murdered and blood stained injured Nigerians such as over 1200 Shiite Muslims, over 480 Igbo dominated defenseless citizens of Eastern Nigeria; 240 civilian detainees in Maiduguri’s Giwa Military Barracks including 29 children and babies between newborn and 5yrs; 236 Rann Christian IDPs in Borno State, 50 rural Christians in Adamawa and 159 children in the Northeast, to mention but few; the COAS and his squad of kaki goons are undone and bent on shedding more blood of innocent and defenseless Nigerians.

In other social climes, military generalship is earned through wizardly and expertise in modern military soldiering including sharp mental, forensic and scientific soldiering, but in the Nigerian Army of Buratai’s era, the likes of Buratai’s military generalship is earned through civilian butcheries, locomotive and archaic soldiering as well as litany of other in-service atrocities and immoral conducts.


It is on record that while Paul Geidel. Paul Geidel Jr. (April 21, 1894 – May 1, 1987) was the longest-serving prison inmate in the United States and the world, whose sentence ended with his parole after being convicted of second-degree murder in 1911, aged 17, Geidel served 68 years and 245 days in various New York state prisons; kidnapper and rapist Ariel Castro was one of those in the world sentenced to life without parole plus 1,000 years. Parole means that a prison sentence, no matter how long, can be adjusted at a later date.


A millennium jail sentence is a period equal to 1000 years, also called kiloyears; usually spanning beyond a convict’s lifetime with perpetual blacklisting and quarantining of his or her remains after death. 1000 years jail sentence without parole or commutation usually arises from criminal court convictions against a repeat offender over numerous count charges of classified crimes or perpetration of different types of heinous crimes. As part of same, a criminal court can sentence an offender for multiple years of imprisonment and have same convicted person sentenced for more years for other count charges including second degree murder, etc.

Therefore, the widely reported vow by the Chief of Army Staff, Lt Gen Tukur Yusuf Buratai, to obey to the letter the incoherent “death-for-ballot snatchers” order of President Muhammadu Buhari is, to say the least, shocking and highly regrettable. Apart from being a clear cut admission of guilt or responsibility over the military massacres highlighted above, the COAS’s re-ordered killing is also grounded in figurative expression (i.e. simile). That is to say that the “death-for-ballot-box-snatchers” further means “vote against PMB or defend anti PMB votes and die or be killed on the spot”. This is more so when ballot box snatching skeletally takes place in the broad day light but becomes widespread at late night; when most soldiers must have retired to their liquor and brothel joints with their rifles.

Therefore, the COAS’s re-ordered killing on Nigeria’s Election Day is nothing short of preemptive and psychological terrorization of the country’s 72 plus million PVC holders particularly those in the Southeast, South-south and potential opposition voters in the North and Southwest Nigeria. From the analysis of the COAS’s “vote against PMB and die” statement and associated threats, the Nigerian Army has singled out four South-south States of Rivers, Delta, Cross River and Akwa Ibom for Election Day military siege, infliction of widespread fears and brutal suppression of the electoral wishes of voters in the areas.

The Nigerian Army must also have been frustrated by the eleventh hour suspension of election boycott calls in the Southeast and South-south and decided to do it the hard way; in the context of “the lesser the voters’ turnout in the areas, the brighter the rigging chances in favor of their C-in-C” . Similar signs are also beginning to emerge in the Northeast States of Taraba and Adamawa and North-central States of Benue, Plateau, Kwara and Nasarawa as well as Northwest State of Southern Kaduna; all witnessing heavy military presence and unleashing of military and psychological terrorization.

The major aim of the Nigerian Army, headed by Lt Gen Tukur Buratai, in all these, is to heighten tensions and psychological fears among the voters in the above named areas with massive military deployment and sundry brutalities so as to scare away many of the voters and have a field day to engage in several sinister electoral practices for purpose of returning their present “C-in-C” to power at all costs and against the sacred electoral wishes of most voters in the areas.

On the other hand, the areas not included in the above such as the Northwest States of Kano, Kebbi, Zamfara, Sokoto, Katsina and Jigawa; the Northeast States of Borno, Gombe, Bauchi and Yobe; the North-central States of Niger and Kogi; the Southwest States of Ondo, Ekiti, Oyo and Osun as well as the South-south State of Edo are expected to have lesser or a fraction of military presence and military generated tensions; leading to mass turnout of the voters in the areas.

The States of Sokoto, Kebbi, Zamfara, Katsina, Jigawa, Kano, Northern Kaduna, Borno, Gombe, Bauchi, Yobe and Niger and to some extent, Kogi and Muslim areas of Nasarawa are expected to witness widespread under-age, alien and multiple voting with security agencies looking the other way. The relaxation of the use of card readers in the above named areas particularly in their rural parts is most likely going to be widespread; whereas in the named Southern parts and Christian areas of the North, the reverse is most likely going to be the case in large scale proportion; under the red eyes of the drafted security agencies. Partisanship is also expected to let loose among the country’s security agents especially along North-South and Muslim-Christian divides.

The Coalition, therefore, makes bold to say that the above highlights clearly constitute the “other side” of the COAS; Lt Gen Buratai’s re-ordered killing and associated military threats on Nigeria’s Election Day. Nigerians and members of the international community including foreign poll observers are, as a result, invited to critically study and analyze this statement and compare same with what will play out from the confines of the Nigerian Army, Lt Gen Buratai and his squad of kaki goons on Election Day or tomorrow, being 23rd Feb 2019 and hours following same.

Far from the figurative meaning of the COAS’s re-ordered killing and related others, the COAS and his squad of kaki goons risk kissing the local and international iron bars of the prison for 1000 years without parole over all military associated killings or deaths in the country or any part thereof, in relation to the said Poll. Specifically, the COAS and his squad of kaki goons shall be held responsible for killings or deaths investigatively traced to the doorsteps of the Nigerian Army from 6pm, today, 22nd Feb 2019 to 6pm tomorrow, Saturday, 23rd Feb 2019. There is also high possibility of holding the Army and its COAS culpable in the event of any killing that may occur between 6pm Sunday, Feb 24th to 6pm Monday, Feb 25th 2019.

The Nigerian Army must be lest assured that such killings, if occurred, shall be expertly investigated including determination of circumstances, places, dates, time and identities of those killed and their killers. Principles of use of force including self defense, proportionality or dis-proportionality of same as well as available legal instruments governing election security and limits of the military in the use of force, etc shall also be forensically considered. It gladdens our heart that the COAS and his accomplices have been formally, legally and expertly dragged to the ICC over the massacre and maiming of hundreds of unarmed and defenseless Nigerian citizens in Eastern Nigeria; on account of recent research work of Intersociety. From the look of things, the names of the COAS and his squad of kaki goons are in a verge of making it again to the ICC and other domestic international criminal courts. Times and circumstances shall tell!


Finally, Nigerians particularly voters from all over the country, irrespective of their religion, sex or ethnic backgrounds; with the exception of double registrants or PVC owners, multiple, underage and alien voters or PVC holders are called upon or invited to file in reports of any military intimidation especially blockade and denial of voting access and shooting, maiming or killing of any unarmed and defenseless citizen; to the Coalition or Intersociety or Southeast CLO. Such established complaints can be sent to us through the following contacts: [email protected] , [email protected] , [email protected] , or +2348035090548, +2348174090052, +2348035372962.

Exclusion of double registrants or PVC owners, multiple, underage and alien voters or PVC holders is in no way a license to kill them summarily but to arrest and punish them lawfully and as prescribed in the extant laws of the country including Electoral Act of the Federation, as amended. Citizens filing such complaints must primarily ensure that circumstances of the incident including killing, maiming and intimidation or brutalization; identity of the victim, location, date and time of the incident; photos and videos where possible, as well as the uniform or personal identity of the perpetrator (s), etc are included in their preliminary reports to the Coalition.