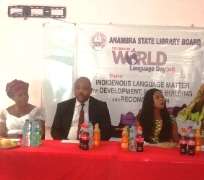 Anambra State Library Board has joined the rest of the world in celebrating the 2019 World Language Day, also known as the International Day For Mother Tongue.

The event which took place at the Adorable British Nursery and Primary School, Awka, Anambra State attracted pupils, civil servants, librarians, parents and other members of the public.

In her address of welcome, the headmistress of the school, Ms. Ms. Norma Terry, represented by the school's Igbo teacher, Miss Love-jane Osuoha eulogized the state library for finding it worthy to partner with them in commemoration of such a great day. She described language as a heritage and a cultural value which is worth sustaining and promoting, noting that he whose language goes extinct has actually lost his identity and cultural heritage. She decried the current lamentable state of the Igbo language which is swiftly sinking off, and charged everyone, especially Igbo parents and guardians to join hands in appreciating and upholding the beauty of the language, thereby protecting it from risk of extinction.

Elaborating on the origin, importance and the year's thene of the day, the acting Director of the Anambra State Library Board, Dr. Nkechi Udeze described the day as special, being set aside by the United Nation Education Scientific and Cultural Organization (UNESCO) in 1999 to celebrate the various languages of the world, having seen the risk of extinction threatening many of them. She condemned the lachrymose acts of some teachers, schools and Igbo parents who do not speak nor allow people to speak Igbo language to their wards, and even rather punish them whenever they speak it; which she said is one of the things that may cause the language to go extinct in a nearest future, as predicted by the UNESCO in 2012. Dr. Udeze who highlighted the numerous importance of knowing and mastering one's own language, also charged everyone to learn other indigenous languages, which will not only guarantee their safety anywhere, but also enable them to fit in, communicate and adapt anywhere they find themselves.

Citing Yorubas and Hausas as among the few ethnic groups in the country that still value, cherish and regularly speak their indigenous languages, she finally enjoined and called on the pupil, the participants, parents, schools and every Igbo son and daughter to take the language very serious, teach, uphold make regular use of it at all times. Highpoint event included: reading of event Igbo novel to the pupils, cultural performances by the pupils, as well as donation of books titled: 'Saving Igbo Language From Extinction' and 'Igbo-English Dictionary' by the library to the school, for their library uses.