Buhari’s Orders On Ballot-box Snatchers: Portents For Our Military 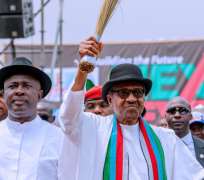 The possibility of this short article being misunderstood is a fact I have accepted. Nevertheless, what has to be said must be said. All I ask is readers form their conclusions based on fact.

President Buhari’s marching orders on election ballot-box snatchers at the APC caucus meeting is well known. It bothers me that many commentators on the president’s statement did not carefully analyze it. While everyone is free to draw any conclusion, it should be based on fact, either overt or implied.

Tiresome though it may be, let us look at the president’s words:

‘Anybody who decides to snatch ballot boxes or lead thugs to disturb the process, maybe that will be the last unlawful action you will take. We have directed the military and other security agencies to be ruthless. We are not going to be blamed that we want to rig elections.

‘I want Nigerians to be respected and let them vote whoever they want across the parties. I am not afraid of that. I went round the 36 states and the FCT and I think I have enough supporters across the country to vote for me.

‘So I want to warn anybody who thinks he has enough influence in his locality to lead a body of thugs to snatch ballot boxes or disturb the voting system, he will do it at the expense of his life.’

While the highly partisan debate on the rightness or wrongness of the president’s speech continues even 48 hours to the election, I have been nagged by the role of our military in this matter. Lieutenant-General Tukur Buratai, the Chief of Army Staff, has laid the law in clear terms: the army will obey the orders of its commander-in-chief; politicians inciting the military to disregard lawful orders from the civil authorities (implication: Atiku and his opposition PDP) should desist; the military remains neutral but will deal decisively with threats to the electoral process; military personnel should avoid ex-colleagues-turned-politicians (what of ADCs to the likes of retired Brigadier Buba Marwa?); and ‘should any officer or soldier have doubts as to his loyalty to the Nigerian state as presently constituted, such a person has up to February 22 2019 to resign’. (These are Burantai’s exact words).

These questions have kept me reflecting, given the antecedents of our uniformed services in Nigeria’s politics. First, do Buhari and his government constitute the Nigerian state? Presidents and governments come and go but the state remains. What if Buhari loses this election? Like the army boss said, a core value of the military is loyalty to constituted authority. In his words,’ loyalty must be hundred percent.’

Who comprises the constituted authority? Clearly, the state which is represented by the government drawing its lawful authority from the state. This is in a democratic setting to which our army only started getting used to a mere 20 years ago. Be that as it may, the government in this democratic setting must ensure its orders are lawful from the generally accepted laws of the state.

It has been said that Buhari’s words did not translate to giving the country’s security agencies a shoot-at-sight order. Very true. But look at his words: the security agencies have been directed to be ruthless. It gives a wide area of action to the law enforcement agents. And you and I are not privy to operational orders and briefings by service chiefs and other security bosses to their operatives.

Burantai said these words on the matter: ‘There is no room for indiscipline or disobedience to lawful orders in the Nigerian army today.’

I dare ask: are these directives on ballot-box snatchers lawful orders? Before we look at this some historical insights may help.

Following the clearly manipulated 1964 general elections contested by alliances, namely the NNA and UPGA, that had been at each other’s throats not unlike today’s APC and PDP, the president, Nnamdi Azikiwe, (then we had a parliamentary system of government) refused to ask the winner of the controversial election, then Prime Minister Tafawa Balewa of the Northern People’s Congress, the dominant party in the NNA, to form a government. These insights from Max Silloun, the respected Nigerian military historian in his book: ‘Oil, Politics and Violence’ may help us see the mantra of the current Chief of Army Staff on lawful orders in a new light:

‘President Azikiwe summoned the heads of the army (Major-General Welby Everard), navy (Commodore Joseph Wey) and police (Louis Edet) to remind them of their oath of loyalty to him in his position as the commander-in-chief of the country’s armed forces. The President and the Prime minister jockeyed for control and loyalty of the army, as many thought Azikiwe might use the army to intervene to break the political deadlock ….

‘Welby-Everard circulated a memorandum to his senior officers confirming this stance. Azikiwe also obtained legal advice which indicated that the service chiefs were right to declare their willingness to take orders from the Prime Minister only.’

Although the situation above and the contemporary situation differ, useful lessons can be drawn. Fundamentally, is Buhari’s directive on box-snatchers legal and thus binding?

First, there is an Electoral Act of 2010 guiding elections in Nigeria and stipulates in Sections 129 (1) and (2) how ballot-box snatchers should be dealt with. It stipulates due prison term of 24 months.

Second, on March 23 2015, a Federal High Court in Lagos, presided over by Justice Ibrahim Buba, ruled that the president had no powers to deploy soldiers in the conduct of elections. The judge directly ruled it was illegal to deploy troops for the conduct of elections. It was Hon. Femi Gbajamila , the APC Leader in the House of Representatives, who filed the suit to which the judgment was pronounced. To the best of my knowledge, that ruling has not been overturned. The court ruled the armed forces have no role in elections and soldiers can vote in their barracks.

Against this backdrop, should our military‘s loyalty be to Buhari’s orders or the state?

Let nobody make light of electoral malpractice in Nigeria. But dealing with it in an extralegal manner may take Nigeria down a tunnel we may not like. And our beloved military must be insulated from politics.