Ohaneze raises alarm over plots to scuttle election in Southeast. 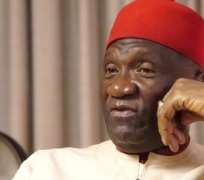 The leadership of Ohanaeze Ndigbo Youth Council Worldwide have raised alarm over plots to subvert the will of the people of the Southeast during Saturday's election.

President General of the youth group, Okechukwu Isiguzoro made the allegations on Wednesday in Abakaliki.

He said that Ohaneze Youth through credible intelligence report gathered that a political party working with some leaders in the Southeast have mapped out plans to scuttle the presidential elections in the Southeast.

He recommended that anyone caught engaging in any acts capable of scuttling the voting will of the people should suffer same penalty as anyone caught in snatching ballot boxes.

He said: "OYC have discovered a dangerous trend going on now in the Southeast ahead of the rescheduled Presidential Election on Saturday 23rd february 2019.

"From intelligent report the organisers of a meeting scheduled to hold in Enugu on Thursday 21st February between some Igbo Organizations have been induced by agents of some political parties to scuttle the voting will of the people of the Southeast".

"Ohaneaze Youths is recommending to relevant authorities that anyone caught engaging in vote buying especially in the Southeast should face the same penalty as anyone caught in snatching of ballot boxes".

"Igbo Youths know exactly where they will cast their votes, especially in consultation with the Southeast Governors and political leaders. We will surely deliver our votes in one direction towards ensuring that we will return Ndigbo to the mainstream".

" Perpetrators of vote buying in the Southeast are banking on expected voters apathy likely going to happen in the Southeast because those who returned home last weekend for the rescheduled election may have returned to their bases".

" Some Igbo leaders have set up secret hide outs where they plot on how to dispatch funds to their recruited agents for vote buying ,we are watching them keenly and will alert the world on their next move.

The group vowed that youths in the Southeast will resist vote buying in the region.

"We call on Igbo Youths never to sell their votes as those Igbo leaders are no longer protecting or advancing the collective interest of Ndigbo but that of a few desperate cabals the have aligned with".