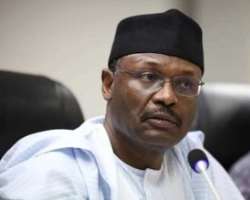 The Chairman of the Independent National Electoral Commission (INEC), Mahmood Yakubu, on Tuesday disagreed with President Muhammadu Buhari over his statement that ballot box snatchers in the forthcoming elections should pay with their lives.

Buhari had sparked an  outrage over the statement made by at a national caucus meeting of his party, the All Progressives Congress (APC), on Monday.

Many Nigerians believe that despite the seriousness of the crime of box snatching it was wrong to make the call.

The main opposition party sees the President’s call as part of APC rigging strategy, saying it was meant to scare voters who might stay away from voting.

Buhari had said ballot box snatchers risk losing their lives as he has instructed the military and police to ruthlessly deal with culprits in the coming elections.

For INEC Chairman, Prof. Yakubu, he would prefer that the law takes its cause.

Speaking at a press briefing in Abuja on Tuesday, INEC Chairman   said ballot box snatchers ought to be made to face the law rather than killed in the act as suggested by the President.

He noted that there are prescribed punishments for various election offences in the Electoral Act 2010.