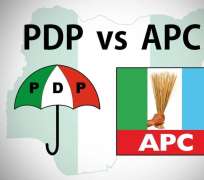 The All Progressives Congress (APC), Delta State chapter has claimed that it uncovered the evil machinations of the state branch of the Peoples Democratic Party (PDP), towards subverting the will/wishes of Deltans.

In a press release made available to The Nigerian Voice Monday in Asaba by the APC state Publicity Secretary, Barr Ogheneluemu Sylvester Imonina, said: "Because of the rejection of PDP by Deltans and the imminent downfall

starring at the face of the Governor of Delta State/PDP, the kingpin of Delta political fraud and his lieutenants now are dangerously plotting for the upcoming general elections.

"Information available to us, shows that in a popular Hotel at Illa Road/Core area of Asaba, Delta State, permanent voters' cards (PVCs) were/are being bought by PDP from unsuspecting members of the public. This nefarious activity of PDP is carried out under the guise of giving employment to the PVCs' holders. After the collection of the PVCs, the sum of between Eight to Ten Thousand Naira were/are given to the holders with the promise of getting back to them (the PVCs' holders) in the near future. It is noteworthy that this antics and evil plans of Delta PDP had been extended to most of the Local Government Areas, and communities, considered to be APC stronghold; particularly in Delta Central, Delta South and Ndokwa nation in Delta North Senatorial District. Local Government Council Chairmen, now reduced to the level of errand boys, are among the people being used by Delta PDP kingpin to get PVCs from members of the public at the Local level.

"Moreover, some lovers of monies who styled themselves as clergymen were not left out of this show of shame and demonic dance! Because of the free monies they are used to, they did the biddings of PDP by collecting the PVCs of some of their church members, on the excuse of getting across to some "so called brothers" in government circle, with a view of assisting them for jobs. An example is that of a clergyman of one of the Orthodox Churches in Udu LGA, who directed members of his Church to submit their PVCs to him. He claimed that the Bishop of the Church, resident in Ughelli was interested in assisting members in securing jobs.

"Though, the evil plans of PDP is not a surprise to Deltans. It is commonplace that politics to PDP in Delta State, is capturing of power through rigging, fraud and manipulations. It is a common knowledge that the present kingpin of Delta PDP is a deadly politician like his mentor whose entire political philosophies of governance revolves round looting of the Commonwealth/patrimony of Deltans. To the kingpin, the taking over of power from him by Deltans would signal the crumbling of his economic and political empires.

"Besides the above evil machinations of Delta PDP, another evil strategy of PDP is going from one polling unit to the other with the voters' register to count out their supporters and mark out the likely threat. Same is like counting the chickens before they are hatched. They lobby the possible threat(s) and consolidate on those who they have bought already. Where PDP kingpin/lieutenants feel that they cannot penetrate, their plan is to play the role of "a bull in China shop" before, during and after elections. APC is grateful to Deltans and happy that Deltans are wiser now, as they are resilient in kicking PDP out of Delta State.

"Also, one of the most criminally tainted game of PDP, is registering at least twenty (20) members from each polling unit to act as polling agents for twenty (20) different political parties. The passport photographs and the account numbers of these fake polling units party agents have been collected already. What these twenty (20) fake agents will do is to initiate rigging process at the polling units, cause confusion where and when necessary and generate fake results to discredit INEC.

According to the release Deltans/Nigerians should imaging what picture could be painted/created by about twenty (20) fake party agents, refusing to sign score/result sheet(s) after a free and fair credible election in areas considered to be APC stronghold.

"APC, Delta State calls on INEC to be watchful and be extremely careful in order to overcome these PDP's political desperation. We state unequivocally that there is a huge task ahead, and INEC must be vigilant and ensure there is maximum security in all polling units in Delta State. Meanwhile, INEC should ensure that political parties without candidates for an election, have no reason presenting any agent(s) and/ or anyone disguising as an agent. Where such persons are seen, they should be promptly arrested and punished.

"APC calls on security agents/agencies to up their game in providing a level playing ground for all political parties. They should go after election Riggers and their accomplices who dare to manipulate the will of the Electorates".

Meanwhile, the party stated that APC Leaders in the state, with the help of the masses and people of goodwill are more than ever ready to tame the allege political thieves and their excesses.

The masses would not allow them to steal mandate freely given to their choices (which we believed includes Chief Great Ovedje Ogboru) at the end of the day.

"APC as a responsible Party is ready to play by the decent rules of the game of politics. However, PDP should not test the power of the Masses",; the release added.