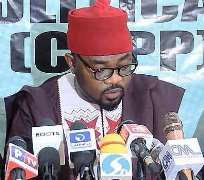 The Coalition of United Political Parties (CUPP) has directed all members to return to the fields to recommence campaign on Monday.

It said this would end by midnight of Thursday 21st February, 2019. Imo Ugochinyere, CUPP spokesman, in a statement on Sunday, said Section 99(1) of the Electoral Act provides that public campaigns shall end 24 hours prior to the day of elections.

“It is therefore wrong to expect that political parties will stop campaigns on 14th February for Polls that will open on 23rd February”, it reads.

“It is unlawful and statutorily wrong to curtail the clear intendment of this Section of the Electoral Act which is clear and unambiguous.

“Campaigning until 24 hours prior to the day of polling is a statutory right of parties and cannot be taken away, curtailed or abridged by any

executive fiat. INEC cannot on its own accord limit the period of campaigns as it is regulated by law.

“Member parties are hereby directed to continue campaigns from today and focus on voter remobilization and ensure that our candidate, Alhaji Atiku Abubakar, is elected and declared winner of the Presidential election.”