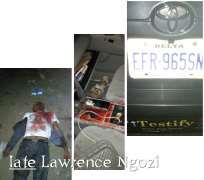 It was gathered that the governor’s aide who is fondly called Ngozi was shot dead on Friday around Ekpan in Uvwie Local Government Area of Delta State.

It was learnt that the development resulted in heavy shooting by suspected youths in Ekpan.

It was learnt that Ngozi was ambushed by his killers while returning from an outing with his girlfriend on Friday night.

It was not clear at the time of filing this report if the deceased’s girlfriend was also killed by the hoodlums.

Sources added that he was repeatedly shot on his chest and head as the hoodlums were said to have waited until their target gave up the ghost before leaving.