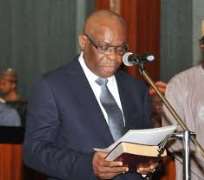 Justice Walter Onnoghen, suspended Chief Justice of Nigeria (CJN), on Friday pleaded not guilty to the six-count charge bordering assets declaration brought against him at the Code of Conduct Tribunal (CCT).

The News Agency of Nigeria (NAN) reports that Onnoghen appeared at the tribunal following Feb.13 bench warrant issued for his arrest.

NAN recalls that the charges were offshoot of a petition filed by the Anti-Corruption and Research Based Data Initiative (ARDI) before the Code of Conduct Bureau (CCB).

Onnoghen has been accused of maintaining undeclared sundry and domiciliary accounts primarily funded through cash deposits made by himself among other allegations.

The government alleged that the suspended CJN had failed to declare his assets immediately after taking office as CJN.

According to the prosecution, the action went contrary to Section 15 (1) of Code of Conduct Bureau and Tribunal Act.

Mr Danladi Umar, Chairman of the tribunal, however, admitted the defendant to bail on self-recognisance.

Umar also struck out the bench warrant he issued to compel the defendant to before him.

He therefore, adjourned the matter until March 11, for the hearing of all pending interlocutory applications.

NAN reports that the defendant had filed a motion challenging the jurisdiction of the tribunal to try him.

Onnoghen, also filed a motion asking the chairman of the tribunal to recuse himself from adjudicating the matter.