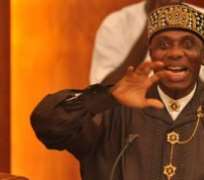 The group at a press briefing in Abuja alleged that the presidential campaign of the ruling All Progressives Congress (APC) is being bankrolled by an Israeli company with a contract interest with the Nigerian Federal Ministry of Transportation.

Addressing a select group of journalists in Abuja on Wednesday, the Operation Director of the group, Demba Abdullahi, disclosed that HSLI Systems and Technology Limited had a $195 security waterway contract with the Nigerian Government until it was terminated last year by the latter.

The group alleged that prior to the termination of the contract, the company had been paid $50 million which was never refunded, submitting that the said payment is allegedly being diverted to find the President's campaign.

On Monday, October 30, 2017, Amaechi had stunned his audience at an event to mark the World Maritime Day, as he unveiled an extensive deal at an estimated value of $195 million with an Israeli company, which he did not name (later it was revealed that the company's name is HSLI Systems and Technology Ltd.).

Amaechi revealed that as a result of the deal, the unnamed company would gain complete control over Nigeria's waterways for a period of three years. The Israeli company, he said, would provide training services to the Nigerian national security forces, and at the end of the three-year contract, the Nigerians would regain full control of the waterways from the company.

Minister Amaechi, who doubles as Director-General of the Buhari Campaign Organisation, explained that the project would obviate the necessity for safekeeping and escort of ships and vessels crossing Nigeria's waterways. The contract was finally approved and signed by the Federal Executive Council in October 2017.

The statement given by Amaechi at the International World Maritime Day event had soon faced strong resentment from a long list of organisations and a wave of opposition that reached the door of the House of Representatives. This led the House of Representatives to begin investigating the matter. Many clauses of the agreement remain vague, including elementary information such as the identity of the implementing company (HLSI), the exact equipment to be supplied, and how the Navy, which is responsible securing Nigeria's waterways in general, is aware of the agreement's full implications.

In May 2018, Buhari bowed to public pressure and announced the complete annulment of the deal, and the initiation of an investigation led by the NSA and the DIA. Since then, nothing has been said about the $50 million advance payment to HLSI.