Suspected Gunmen in military uniform Responsible
By The Nigerian Voice 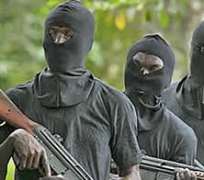 Gunmen wearing military uniform today,Thursday, attacked the vehicle belonging to the Independent National Electoral Commission, INEC, in Benue State while it was conveying non-sensitive election materials to one of the LGAs in the state.

The State INEC’s Resident Electoral Commissioner, REC, Dr. Nentawe Yilwatda made this known while addressing newsmen in the state. He said the vehicle was carrying non-sensitive materials to Logo area of the state when it was attacked.

According to him, “This is true. Recently, our vehicle which was conveying non sensitive materials was attacked along Logo area by people in military uniform.”

Meanwhile, the security agencies have commenced investigation on the alleged attack.