As Party Candidates Sign Peace Accord on 2019 Elections
By Ahmed Abu, The Nigerian Voice, Maiduguri 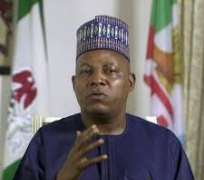 The Borno State Police Commissioner, CP Damian Chukwu has warned all political parties and their candidates contesting the 2019 general elections to strictly observe the laid down electoral laws and conduct themselves peaceful and properly or face the wrath of law without fear or favour.

He also said that adequate security have been put in place and all police officers and men assigned to provide security during the election period have been adequately briefed and detailed to ensure peaceful and hitch free elections.

Addressing 46 leaders and candidates of political parties that will be participating in the elections in Borno State invited to sign Peace Accord Memorandum of Understanding (MOU) at the Police Headquarters Conference Hall, the CP added that there would be no more campaigns as from today, Thursday as all political parties and candidates must abide by the rules of the game.

He however advised that election is not a do or die affair and police will be available to give protection to all the citizens not only the candidates, cautioning that, nobody should take the law into his or her hands, say or do anything detrimental to the peacadul conduct of the elections.

Damian urged the candidates, party leaders , supporters and members to conduct themselves properly and in an orderly manner while stressing that the peace accord was organised as usual preparatory to the 2019 general elections which is at the corner to ensure free, fair and smooth elections without any rancour or public disorder.

The CP noted that this followed the experiences of last party primaries and elections where there were lot of violence including thuggery where youths were used to cause havoc under drugs and alcohol that led to petitions which are still being investigated.

He said however, complainants did not come further to follow up their petitions and some are not living in Maiduguri city.

The Deputy Commissioner of Police DCP Oladimeji Tomi in charge of Police CID Borno State administered the signing of the MOU by the 44 party candidates and leaders.

The State Director, NOA, Yahaya Imam in his remarks, commended the CP for organising the ceremony and said that once a party signs the peace accord, it will be binding on all the candidates of the party whether present or absent in the overall interest of peace, unity and progress of the state and country at large.

He said politicians were given adequate chance to mobilise for votes and support, therefore, election period is only meant for elections not campaigns while appealing to the candidates and party leaders to educate and enlighten their members.

The IPAC State Chairman, Mukhtar Abdallah urged all the parties and candidates to comply with the laid down rules and regulations guiding the general elections to ensure peaceful and hitch-free elections.

Chairman of 32 Governorship Candidates Forum, Alhaji Rufai Monguno in an interview confirmed that all the 32 Governorship candidates in the state will participate in the 2019 elections and have agreed to comply with the peace accord.

He said the forum has been carried along and considered or involved all the scheme of things by the security agencies in the state without any discrimination, contrary to the earlier allegations leveled against the police, security agencies and APC ruling party in the state that they sidelined the 32 Governorship Candidates.

The State Commander, NSCDC, Borno State, Abdillahi Ibrahim in his vote of thanks appreciated the CP for organising the ceremony and advocates for non violence election while urging the politicians to conduct themselves in an orderly, peacefull, properly and matured manner.