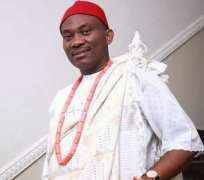 In a survey carried out by The Nehems, a civil society group shows that Elumelu, who has served the Constituency before but seeking to return got a whopping 61 percent.

According to them, Paul Adingwupu, of the All Progressives Congress (APC), got 37 percent while Ify Vivian Nwabuokei, of Accord Party garnered 2 percent in the pre-poll survey.

The group explained that they were particularly interested in the candidates aspiring into Electoral public offices, "and not necessarily the political party platform".

Sorokwu, noted that the survey was not to preempt the outcome of the actual February 16th polls with respect to the percentage of electorates' preferences in the 42 wards of the federal Constituency.