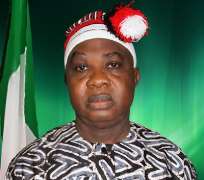 Ebonyi state chapter of the Peoples Democratic Party, PDP, has called on members of the party including supporters to resist any form of malpractice, rigging and sharp practices during and after voting in the forthcoming general election.

The State PDP Chairman, Barr. Onyekachi Nwebonyi who stated this during while briefing newsmen in his office at the Party Secretariat in Abakaliki, the state further enjoined them to resist any form of unwarranted arrest from security operatives in the state.

According to him, we must have to vote out the APC government which is anchored on rhetoric, deception and falsehood.

"Make sure your votes are protected and follow results up to collation centres. Your vote is your future. We must have to vote out the APC government which is anchored on rhetoric, deception and falsehood.

"The time is now to exercise our franchise. We have been held to ransom by a cabal operating under cover to advance ulterior agenda. Nigeria under the present administration has witnessed rancorous divisions along religious and ethnic lines more than any other time in the history of the country. Nigeria has suffered much economic hardship.

"A vote for the PDP will get Nigeria working again, while a vote on the contrary will get Nigeria to the next level of economic recession, herdsmen attacks, insurgency and disrespect for the rule of law.