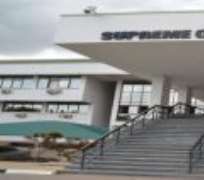 Supreme Court has fixed Tuesday to give judgement on the appeals filed by the factions of the All Progressives Congress (APC) in Rivers State.

The factions led by Mr Rotimi Amechi and Senator Magnus Abe had approached the apex court to challenge the judgement of the Federal High Court in Port Harcourt which set aside the direct and indirect primaries conducted in the state.

Presiding over the matter on Monday in Abuja, Justice Bode Rhodes fixed February 12 for judgement after taking arguments from counsel for the appellants – APC, Lateef Fagbemi, and counsel for the respondents, Henry Bello.

In his address, Fagbemi urged the apex court to nullify the judgement of the Federal High Court in Port Harcourt on the ground that the trial court had no jurisdiction when it entertained the suit.

He also claimed that since the trial court had no jurisdiction, its judgement in the matter amounts to a nullity and should be set aside.

Fagbemi specifically asked the Supreme Court to invoke Section 22 of the Supreme Court Act and give final judgement in the matter to end the multiple cases arising from the APC's primary election in Rivers State.

On his part, Bello urged the court to dismiss the appeal of the APC on the ground that it has become a mere academic in nature.

Bello also informed the court that the respondent led by, Ibrahim Umar, who were aggrieved by the violation of the Electoral Act and the 1999 Constitution in the manner APC conducted pre-election matters in Rivers, had secured a consent judgement in their favour that the judgement still stands.

He urged the court that to hold instant appeal has become an academic exercise.

Thereafter, Justice Rhodes said judgement would be delivered on Tuesday and reasons would be given later. (ChannelsTV)