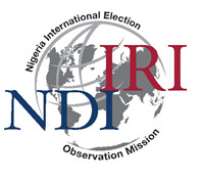 “The world needs to stand by the Nigerian people through these very important elections. The NDI/IRI delegation is here to demonstrate our continued support for credible elections,” said President Mogae. “The general elections for president and National Assembly represent a critical step in further strengthening the quality of Nigeria’s democracy and this great African nation.”

“Since 2015, a number of steps have been taken to improve the electoral process such as continuous voter registration and guidelines to curb vote buying,” said President Vike-Freiberga.

“Our observation mission seeks to provide a comprehensive and impartial analysis of the entire electoral process while showing international support for peaceful, inclusive, transparent, and credible elections.”

The 40 short-term observers will join a core team of thematic experts who arrived in Abuja in early February. The delegation will review all phases of the electoral process taking into consideration observations from the three pre-election assessment missions conducted in July, September, and December.

NDI and IRI have organized more than 200 international election observation missions around the globe, earning a reputation for impartiality and professionalism. The NDI/IRI mission to Nigeria will conduct its activities in accordance with the Declaration of Principles for International Election Observation and Code of Conduct adopted by the United Nations in 2005 and will base its findings and recommendations on Nigerian laws and international standards for elections. All activities will be conducted on a strictly nonpartisan basis and without interfering in the election process and in conformity with the laws of Nigeria. The NDI and IRI joint election mission is a demonstration of the international community’s continuing support for democratic processes in Nigeria and is intended to help promote public confidence in the electoral process.