Senator Joseph Waku:  a Life Of Service To The Fatherland 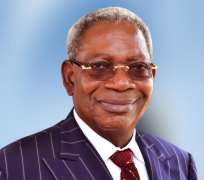 For Distinguished Senator Joseph Kennedy Waku service to fatherland and the development of one’s environment should be the main defining characteristics of men and women who want to add value to their countries. And so all through his adult life, he gave his all to project Nigeria and he died in active service to the fatherland as the Pro Chancellor and Chairman of the Governing Council of the Federal University of Technology Akure, FUTA. The 72 year old Waku hailed from Guam Local Government Area, Benue State but due to dint of hard work, warmth , camaraderie and his penchant for peace building he built bridges across ethnic , religious and social divides and he became a pan Nigerian in whom there was no guile .

He was elected Senator representing Benue North West District of the National Assembly in 1999, on the platform of the People’s Democratic Party (PDP). Senator Waku took office on 29th May, 1999.After taking his seat in the Senate in June, 1999 he was appointed to Committees on Senate services, Works and Housing, Health Establishment Water Resources and Privatization. He served his people and Nigeria to the best of his ability in the Red Chamber. He never allowed his political leaning to becloud his patriotism. The good of the fatherland and the development of its people informed his submissions and positions throughout his stay in the upper legislative chamber He spoke truth to power and became one of the voices of reason in the Nigerian Senate. After his stint at the Senate he continued to work behind the scene to stabilize the ship of State and was an advocate of good governance and people centered policies and projects.

As fate would have it he was appointed as Pro-Chancellor and Chairman, Governing Council, Federal University of Technology, Akure, Ondo State by President Muhammadu Buhari on 9thMay, 2017. Waku became Pro-Chancellor at a critical time when the University was engulfed in a seven month crisis. He brought his astute leadership skills to bear in resolving the crisis thus stabilizing the University. Peace returned as Senator Waku and his team promoted cordial relationship among all stakeholders in the University, especially the Management and the Unions. He provided the balm that healed a sore wound.

The late Pro-Chancellor contributed significantly in the smooth appointment of a new Vice-Chancellor, Professor Joseph Fuwape. The process was completely merit driven and unlike the case in some other Universities, there was no dispute whatsoever as all agreed that the Waku led Council did a good job and the best candidate was picked for the job. Waku added value to the University in many ways. He kick started the commercial farming of FUTA on 15 hectares of land involving Crop Farming, Hatchery, Fishing and Lives stock Production as part of efforts to boost the Internally Generated Income for the Institution and to educate peasant farmers around FUTA and Akure environs on Mechanized Farming. He also jump-started the process leading to the establishment of a Centre of Excellence in Bitumen Exploration in FUTA.

Waku, aware of the advantages of solid Town and Gown relationship led the drive to consolidate this. He met with critical stakeholders including the Governor of Ondo State, Arakunrin Oluwarotimi Akeredolu, the Deji of Akure Kingdom Oba Aladetoyinbo Ogunlade in a determined effort to promote the Good ideals of FUTA and work to ensure its smooth operation and growth. The interactions yielded bountiful harvests. Under his leadership the plans to establish the institution’s teaching hospital took on a new verve with the release of the land for the project by the Akure Kingdom and the Certificate of Occupancy by the Ondo State Government.

Painfully The Pro Chancellor left the scene when he had fully settled into his role of steering the ship of the University to greater heights. Waku was a patriot who contributed significantly to national development at various levels and during his stint as a member of the Nigerian Senate between 1999 and 2003 and as Pro Chancellor of FUTA between May 9, 2017 and February 3, 2019. The University will miss his leadership, wise counsel, camaraderie and peace building efforts. May the Good Lord grant his family, FUTA, and his friends and associates the fortitude to bear this irreparable loss. And may the good Lord grant his soul eternal repose.