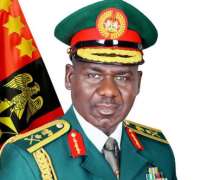 (Chima Ubani Center, Onitsha Nigeria: 8th February 2019)-Int’l Society for Civil Liberties & the Rule of Law (Intersociety) has critically studied the recent lopsided appointment, promotion and posting of the Zonal Assistant Inspectors Gen of Police (AIGs) and State Commissioners of Police (CPs) and concluded that the case of Southeast and by extension, the South-south has gone from bad to worse, if not worst.

In the area of the newly appointed AIGs in charge of the country’s 12 Police Zonal Commands, no fewer than eight are Northern Muslims/Christians; involving AIGs in charge of Zones 1, 2, 3, 4, 5, 6, 7 and 8. The remaining three Zonal AIGs are split among the Southeast, South-south and Southwest Zones, out of which Southeast Zone was given one slot. Four Northern Muslim AIGs are also appointed to take charge of Force Investment, Intelligence Bureau, Maritime and AIG FCID positions.

As a further confirmation of the case of Southeast gone from bad to worse, if not worst, CP Damian Agba Chukwu (CP Borno) will retire from the Force on 19th March 2019 or in 40 days from today. The second Igbo State CP, Celestine Okoye (CP Zamfara) has relatively longer period to stay in the Force and will be due for retirement on 22nd December 2020. The two are only Igbo/Southeast CPs in the list of the 37 newly appointed State CPs.

Revealing, too, is the fact that the only Igbo AIG, Chris Okey Ezike, (AIG Zone 4, Makurdi) will retire on Tuesday, 30th April 2019 or in 81 days from today. Also the only Igbo/Southeast DIG, Godwin C. Nwobodo (DIG Information and Communication Technology-ICT) will retire from the NPF on 12th August 2019 or in six months and twenty days from today.

Totality of the foregoing is, therefore, a strong indication that the dilemma of the Southeast in the Nigeria Police Force has further worsened and entrenched. The newly appointed Acting IGP, Muhammad Adamu has also been critically mirrored, studied and analyzed and found to be “a status quo IGP”; with no meaningful changes expected to take place under his leadership.

The gross lopsidedness and scheming out of the Southeast Region, a home with sedentary and pastoral Judeo-Christian population of no fewer than 50m; from the country’s defense and security positions and the inaction and puppetry antics of the Region’s top political appointees particularly the Southeast Governors have, again, called for serious concerns.

This conversely reminds Intersociety of what happened in 2013 when we raised similar concerns; forcing a former Anambra Governor to take the next available flight to Abuja to meet with then Chairman of the Police Service Commission. The meeting yielded fruit and resulted to the promotion of retired DIG Chintua Amajor-Onu to AIG. Retired DIG Chintua Onu had before then remained as a CP for several years. AIG Chris Ezike immediately after our raised concerns and the former Anambra Governor’s intervention got promoted to CP having managed to get promoted to DCP on 1stAugust 2012; six months after his course mate, now Retired DIG Peter Yisa Gana (former DIG FCID) was promoted to DIG on 22nd February 2012.

We make bold to say that the structural and cultural violence above highlighted are too dangerous a policy or practice and are dangerously threatening the survival of the Igbo Nation in particular and Nigeria in general. They also fuel separatist sentiments with capacity to breed and escalate group radicalism in whole or in part. They are further a confirmation of existence and entrenchment of ethnic cleansing in Nigeria’s security, defense and policing establishments. These annihilative policies and conducts must stop and be discontinued before it is too late or rise to irreversible point or proportion.

Serious Concerns Over Tukur Buratai’s Continued Stay In The Army

3rd January 2019 marks 38 yrs of service-membership of the Nigerian Army by COAS, Lt Gen Tukur Yusuf Buratai. Lt Gen Tukur Yusuf hails from Buratai Community in Biu Local Government Area of Borno State, Northeast Nigeria. He is a member of Course 29 of the Nigerian Defense Academy, having joined the Nigerian Army on 3rd January 1981 at the age of 21 as a member of 29 Regular Combatant Course (29 RC). He was also reported to have been born on 24th November 1960 and commissioned Second Lieutenant on 17thDecember 1983. The COAS was statutorily due for retirement since 3rd January 2016 having attained 35yrs in service, but have refused to leave the Army since then.

Further, it is on record that the COAS joined the Nigerian Defense Academy-NDA when it was still a military training college issuing National Certificate in Education (NCE), thereby making the COAS as one of its NCE recipients. The NDA changed to degree certificates or degree awarding institution from its Course 36; making its recipients to be entitled to or covered by the Harmonized Terms and Condition of Services Officers (HTACOS), 2012 (Revised). HTACOS was intended to make retirement age (i.e. 35yrs in service) in the military (army, navy and air force) different from other personnel or public servants of the Federal Government covered by the Civil Service Rules of the Federation.

However, the HTACOS was designed to start with the 36th Course (C36) and their equivalents and above. The Course 36 members were the first set to start full degree programs at the Nigerian Defense Academy (NDA). Before then, those in Courses 1 to 35 (including Lt Gen Buratai’s Course 29) studied and graduated with the National Certificate in Education (NCE) from the NDA. This means that while Course 36 and above will benefit from all the provisions of the HTACOS, their seniors, Courses 1 to 35, will not have the same and full benefits. The Presidency had in its attempts to defend the COAS and his overstay in NA in June 2017 admitted that the COAS is a member of the Course 29 of NDA. See more details here: https://northeaststaronline.com/?p=3040 .

It is likely that the COAS is presently haunted by innumerable conduct atrocities that greeted and still greet and darkened and still darken his era as Nigeria’s Chief of Army Staff since 13thJuly 2015. Apart from serious allegations of war crimes under his leadership of NA in its counterinsurgency operations in the Northeast, he also bodily and facially watched and did nothing or refused not to consent to the broad day massacre of no fewer than 700 Shiites on 12th December 2015. The massacre started on 12th and ended on 14th December 2015, leaving hundreds of death tolls and hundreds of others with battered injuries.

The Government of Kaduna State later mangled the death figures and admitted that “347 citizens were killed” and buried in criminal mass graves. Subsequent killing of Shiites by the NA also led to hundreds of death including in 2018 when no fewer than 60 were killed, bringing the total to no fewer than 1200 since 12th December 2015. Under Buratai’s watch, too, leader of IMN, Mallam Zaky el-Zaky and his wife were shot and battered before being handed over, half dead, to SSS for solitary and indefinite detention till date.

As if that was not enough, in less than three days, too, no fewer than 180 unarmed and defenseless citizens were shot and mass-murdered by the Nigerian Army under the COAS operational watch, directive and supervision; with over 130 others shot and critically injured. The massacre occurred on 12th, 13th and 14th September 2017 in Abia State part of Eastern Nigeria. The massacre had occurred in addition to earlier killing by the military and police in the same Eastern Nigeria of no fewer than 300 defenseless citizens and injuring of over 370 others in mass killings described by Amnesty Int’l on 24thNovember 2016 as “killings perpetrated under repressive raining of bullets everywhere”.

Today, especially following the release of our special report (Military Massacre Operations In Eastern Nigeria: August 2015-September 2017), another round of image laundering has been let loose, so as to mechanically shore or patch up the drowning image and blood stained integrity of the perpetrators. One of such “awards-on-the-blood-of-the-innocent” was recently christened “accountability and transparency award”. Issuance of human rights reports in today’s Nigeria has become a “bloody diamond and gold” to some persons and groups masquerading as “rights groups” or “CSOs”.

Those vividly described by erudite Prof Ngozi Okonjo-Iweala as “Nigerian fraudulent anti corruption/rights NGOs” are at it again this time around; encouraging the butcheries and emboldening the butchers. It is so sad that even in the NPF, the largest recipients of “Nigerian based human rights awards/certificates” are the chief custodial killers and torturers of legally presumed innocent detainees and other spuriously accused or innocent citizens.

Recently in Anambra State, for instance, a chief custodial killer/torturer and former Anambra State Police SARS commander whose conduct atrocities have been catalogued in several Amnesty Int’l reports and other researched works bordering on gross rights abuses and violations; is presently listed as one of the largest recipients of “human rights awards/certificates” in Nigeria. “Human Rights awards/certificates” in his custody, cited by independent sources, are reportedly in hundreds.

Finally, Intersociety makes bold to say that not even 1000 innocent blood-soaked “human rights” or “accountability and transparency” awards awarded to such atrocity crimes perpetrators to cover up their vicarious and direct involvement in the massacre of thousands of innocent Nigerians can change anything or deter men and women of good conscience all over the world from doing the needful when the time is ripe or appropriate.

These we morally and conscientiously say or benevolently assert in accordance with spiritual guidance and angelical tasks tasked upon us by the restless spirits of the murdered or the butchered who loiter restlessly in cosmic world demanding for justice to be done to facilitate their restfulness and cleansing of their formerly earthly paths now desecrated and flooded with their own innocent blood and tears.

In the words of erudite Prof Ngozi Okonjo-Iweala during her October 2017 immortal and advisory speech to international development institutions including WB and IMF,“international institutions must be careful with fraudulent NGOs in Nigeria. You need to ensure you are working with the right CSOs and NGOs. The people you are fighting are also very smart. They are not just sitting back. They also develop their own NGOs to serve as a front for them; people who can certify them that they are very accountable in what they are doing”

“So, you have to be careful. You have to be able to identify those who are the proper people. And we have many NGOs in Nigeria and in the African continent who are (corruptly and immorally) fighting really hard than to make their governments accountable”. http://nationaljournal.ng/index.php/2017/10/16/okonjo-iweala-warns-imf-of-nigerias-fraudulent-anti-corruption-civil-society-groups/